June 2020 has been a difficult running month after the consistency and progress made during Spring. This was helped by working from home which gives me more time for morning or evening runs. In June I decided to do a rest week and then missed few runs through the impact of building work and bad weather.
Anyway today I returned to Endcliffe Park to start my run and found the ascent through Porter Clough especially tough. I've not ru up here in many month and it showed! Heading to Oxstones the weather turned wet and windy for a few minutes but settled as I continued to Devil's Elbow via God's Spring. After that it was easy to return home via well-worn routes. Although I usually run in the other direction.
The run was hard going, long runs should be done at an easy pace but that would have needed me to work the whole way.
Posted by Adrian at 14:21 No comments:

I started May with a potential knee problem and leave it with some recurrence of my left foot pain. However I've managed some consistency in my running which shows a solid foundation over the spring. 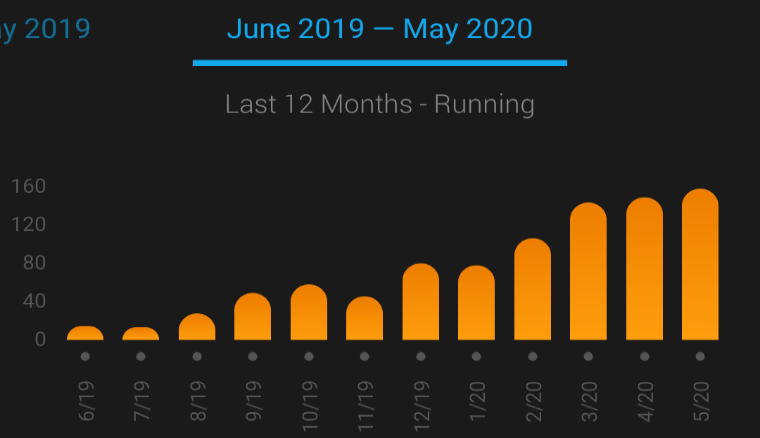 I must try harder on stretching and roller work to reap the benefits long-term.
Posted by Adrian at 16:45 No comments:

Another beautiful day for a run although I set out with tired legs. Today's destination was a little further from home than some of the previous ones and there were many routes to choose. Initially I'd planned to approach via Stanage Edge but decided it would be a bit too far. In the plantation I spotted 2 dear in a firebreak. During Covid runs I've seen deer far more frequently than previously. Maybe their behaviour has changed due to reduced traffic or is it simply that I'm out and about earlier?
I found the target just beyond Cowper Stone. 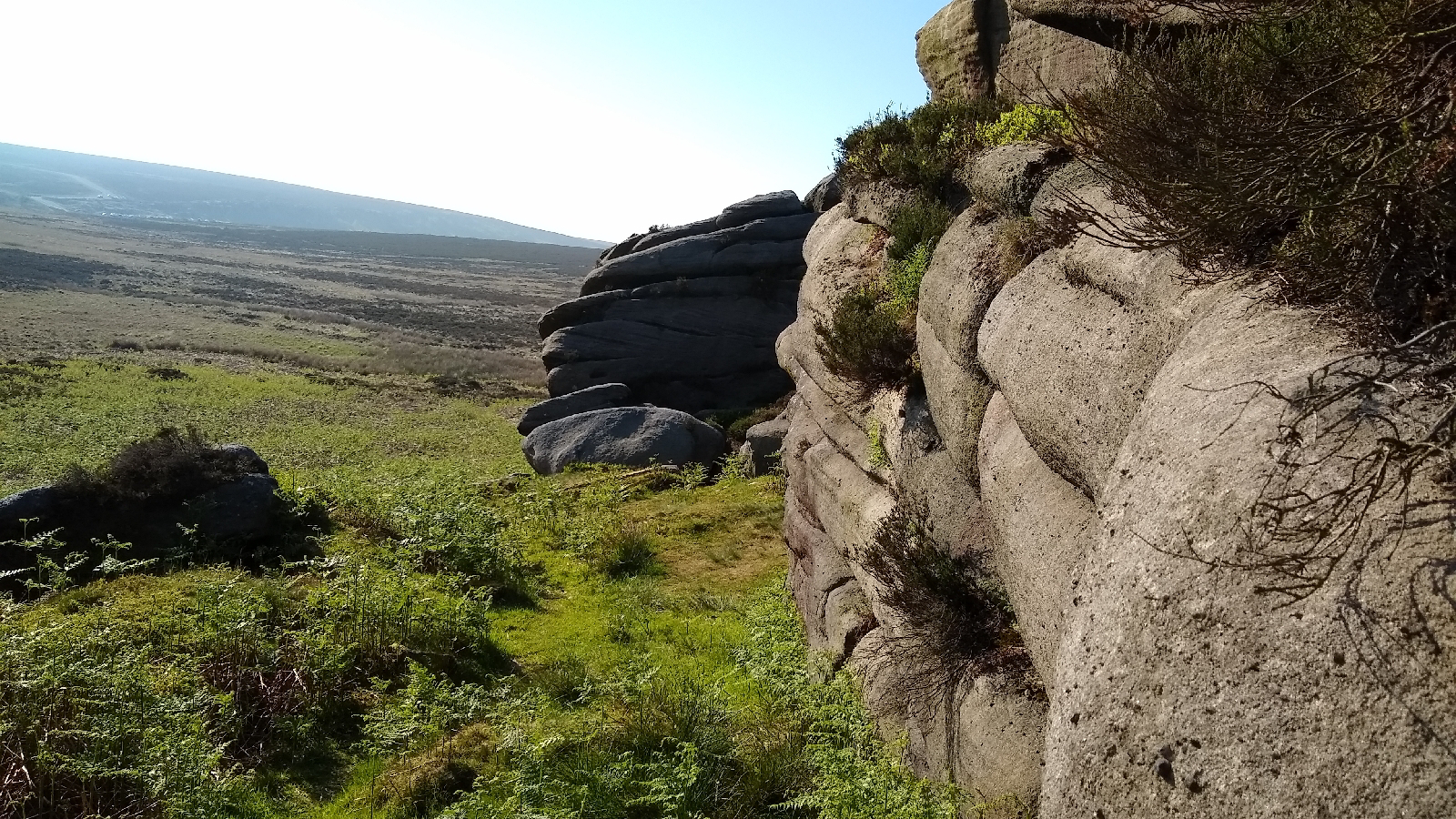 The rock formations include hidden passages and tunnels, perfect for concealing a geocache. I'm not sure whether these spaces are due to natural clefts or mining.
Whilst pausing before departing for home several curlew flew over and another bird (maybe a plover) spotted me and chirpped at me until I ran away.
Posted by Adrian at 16:26 No comments:

The running group's destination runs have been set each week with points set across the Eastern Moors. I missed one as I cut back due to pain in my left knee to take a week off running. It seemed to as I've managed to get back to target after a few weeks building back up.

Today was a shock as the weather has broken and as I ascended out of the sheltered Sheffield valleys the wind and rain were quite unpleasant. On Blacka Moor I spotted a herd of deer, who were sufficiently relaxed to slow me to find my camera and take a few pictures. 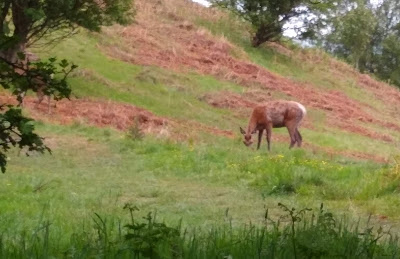 It's well known that deer are on the moor but in the past I've only caught a distant fragment of one.

Destination #9 was described s being below a crag on Houndkirk Moor but despite circling the appropriate spot and peering under stones and into crevices I couldn't find the logbook. I gave up before becoming too cold. It's no matter really, the goal was an encouragement to be out for a few hours on a day when it would have been all too easy to stay warm indoors.

Once again I spotted failure of the HRM belt by super-high heart rate data causing the 935 to indicate a massive effort. The run on Sunday was a few km more than intended but was at a gentle pace.
Just before bed tonight I've fitted a new CR2032, as before it needed 2 attempts to restart and be paired.
It's over a year since last replacement so that's fair although I've not run much so it's not had heavy usage.
Posted by Adrian at 22:28 No comments:

Today we ran to a tree just off Rud Hill, facing the Redmires reservoirs. Very much uphill from home for over an hour, with gradually more exposure to a light wind.
I've not used the permissive path before being unsure of it's condition or route. For this destination it was clearly the intended way to approach.
On the descent, heading back home, I saw a variety of birds. First a chevron of geese, seemingly low flying but perhaps they were north of the ridge and well above the ground?  Then I spotted a solitary bird notable for transverse black and white rings around its body. Looking at bird finders and pictures online it might have been a plover. There don't seem to be other birds in England with that marking, even though it is considered uncommon. There are reported sightings at Redmires so not impossible. On Fullwood Lane there were goldfinches flitting between the hedge and a garden. Perhaps there was a box of seed attracting them.
As my fourth run this week I've slightly exceeded my target. Yesterday I commented that a consistent running routine had enabled weeks without an injury, as one could guess, today I'm aware of my left knee. I've done some roller work in case it's simply tight muscles pulling on things.
Posted by Adrian at 11:11 No comments:

The very unofficial running group are doing socially distant runs by setting a destination and us treating it as an excellent individual orienteering task. Today's run was to a 'promiment rock' south of Houndkirk Road. 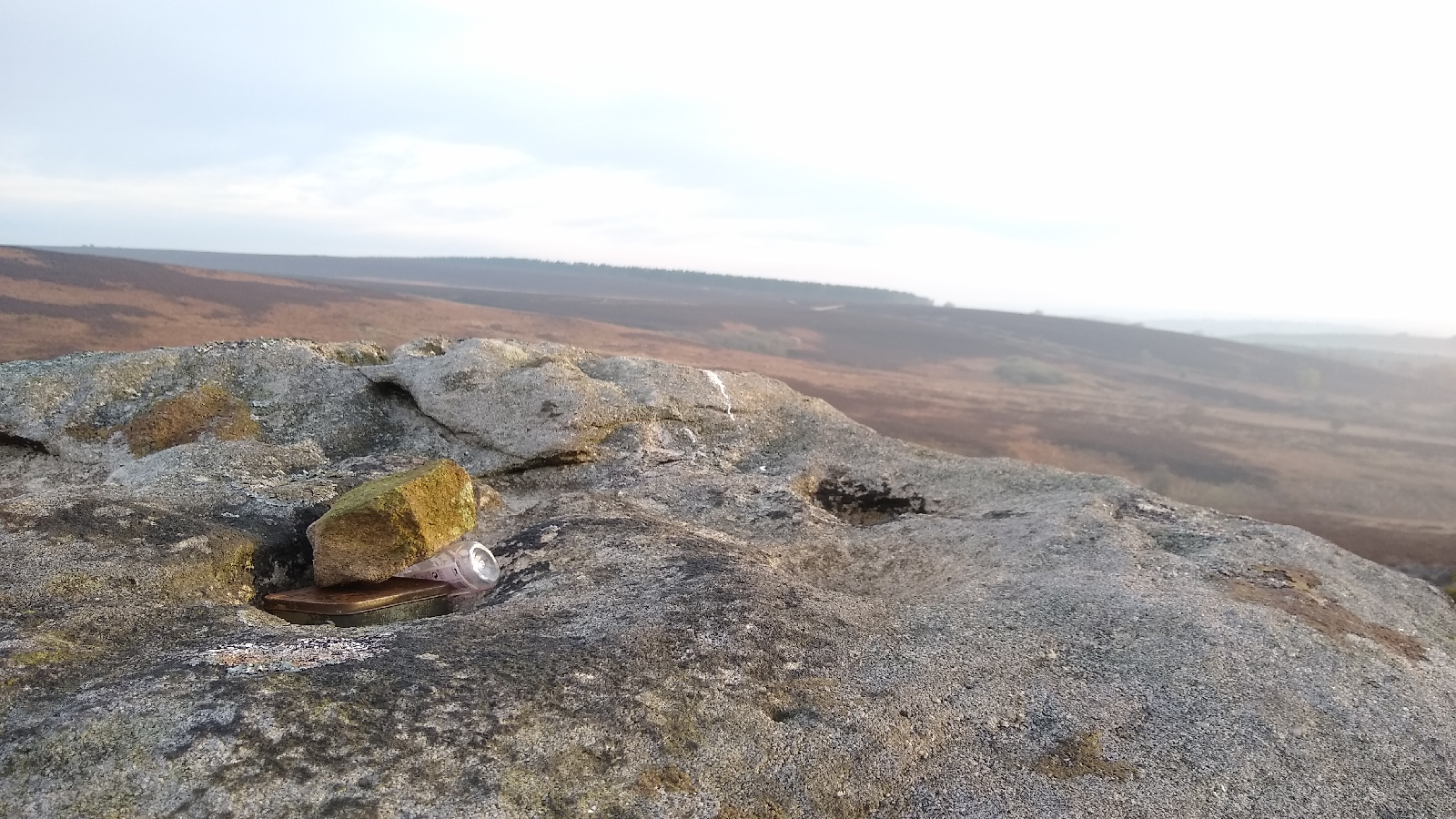 I approached via Dore and Devil's Elbow and found a small path between the footpath and byway. I can imagine it would be soggy in wet weather. Notably I passed a spring, named as God's Spring on the map. Online there are various stories as to how it might have gained this name.
Posted by Adrian at 17:39 No comments: