This morning's swim showed how much a HUUB wetsuit can flatter your ability. For the last week I've been swimming in Spain wearing an ex-demo Grade D HUUB Aerious Wetsuit 3:5 and felt pleased with my improving performance. This morning I was back in the pool in my trunks for 45 minutes and took a huge step back in speed and style!

I know it's well accepted that a wetsuit makes most swimmers faster but although my Alpkit Silvertip keeps me warm, I've not found it to be an obvious performance enhancer.

For the Spanish trip I bought a three different wetsuits and sent two back, keeping the HUUB. At an 'ST' size it felt tight, hard to get on, but flexible around my shoulders and not too loose around my waist. It was partly due to this fitting that I decided one of the others was too big for me. It was just too easy to get on straight from the packet.

An ex-demo wetsuit seemed like a good idea for a swimming holiday as I rightly assumed that it would get stuffed in the back of a van and taken on and off in a bit of a rush. Over 5 days I put it on 8 times, half of those whilst it was wet inside.

I actually liked the idea of the wetsuit looking a little tired, to help get away from the 'all the gear, no idea' image that a set of new, top of the range kit can give. Peeling print certainly won't detract from usefulness.

On inspection I found a repair under both armpits which appeared to have been glued. I made an effort to get the sleeves well up my arms and the torso well-fitted to avoid unnecessary underarm tension. This give me good shoulder mobility and the repairs didn't show any sign of failure during the week. 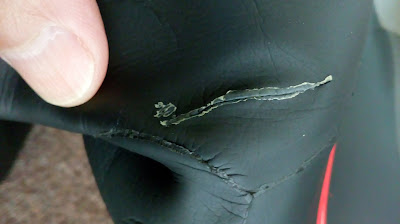 The forearms had lengths where the overlock stitching was undoing itself. I contemplated a DIY repair to stop further unravelling but didn't know how to do it well so decided to leave it alone. 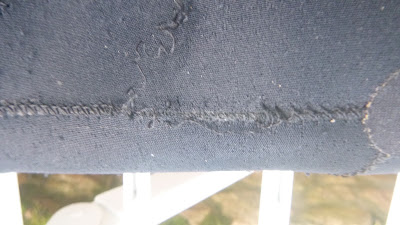 Midway through the holiday, the right forearm seam split at the affected area. This increased the water flow through the suit by a surprising amount. Luckily the water wasn't especially cold and I only had to suffer comments from my fellow swimmers about the 'hole'. 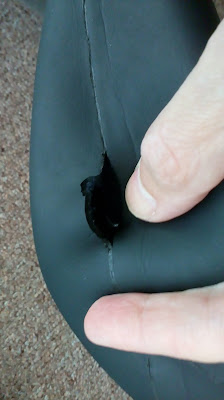 Whilst away, I emailed HUUB and they agreed to undertake a repair under the 30 day warranty which is fair. I'll post a photo of the outcome.

During the week I spotted a few places where fingernails had caught the soft neoprene. I can't honestly say whether they were caused by me or pre-existing. I suspect in some cases they were mine, as although I'm a careful user, a damp wetsuit is hard to get fitted without a degree of tugging. 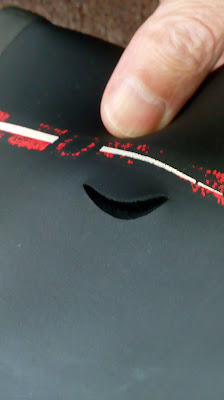 The neoprene bulk fabric  and surface coating are both softer and more 'delicate' in feel than that of the Silvertip and must be more liable to damage.

Although I could have hired a wetsuit at least I wasn't concerned about a deposit on this bargain wetsuit.

I suppose that this is the key aspect of a wetsuit and as can be assumed from the beginning of this post I was very pleased with the wetsuit. The 3:5 buoyancy helped my body position markedly and for most of the swims I left my legs trailing rather than expending energy to move them.

I don't know if the X-O 'exoskeleton' feature really does anything but I did feel well aligned and gradually settled into an effective rhythm with good-for-me pace and stroke length.  There was little flow of water around me, even with a torn sleeve and I was pleasantly warm. The water was mild at between 19°C and 24°C, but usually I get cold in a 28°C pool so I consider the insulation to have been spot on.

From this relatively low cost introduction to quality wetsuits I can appreciate the performance benefit that the manufacturers claim. An ex-demo entry, to last season's model, saved money, and to a large degree, worry about looking after the wetsuit. Perhaps an A or B grade would be a sensible purchase for normal use where more care can be taken of the wetsuit but even with cropped nails, I imagine damage is inevitable.

For me, this suit has plenty of life left and I'll tidy up any nicks in this suit with Black Witch when I get it back from HUUB ready for next summer...
Posted by Adrian at 13:20