With an extra bank holiday for Monday, I felt that I could afford to get a bit extra tired today. I'm hoping to do some more long runs in the (near) future so in my very casual training plan there's a ned to get some longer training runs under my belt. The Cuckoo Way was certainly completed with too little training and I think I was lucky to achieve my goal. Another day I might not be so fortunate.

A circular trip to Hathersage from home is around 30km which is 50% more than my traditional Saturday run so this felt to be perfect. On the way out I discovered a permissive path to  the south of the Redmires reservoirs which avoids around 1.5km of rather dull tarmac. The old byway to Stanedge Pole and beyond is mostly runnable as the gradient is fair and the stones not too sharp. It gives a great view of the Kinder plateau in the distance. 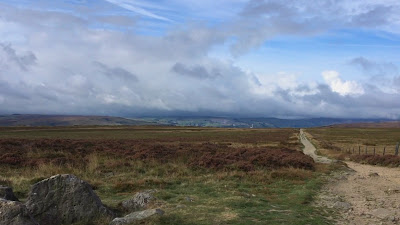 It's an easy and picturesque descent into Hathersage although I was just in time as the course was laid out for the Fat Boys Stanage Struggle and competitors were jogging up to the start area. A little later and I would have been swept back uphill. 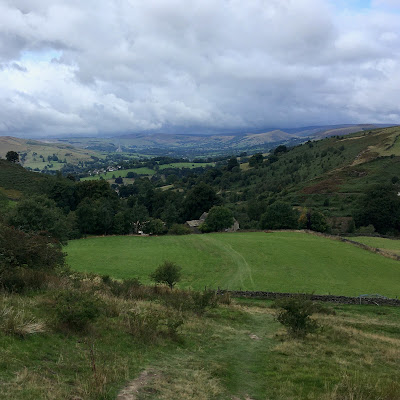 After coffee and half a flapjack I headed for home via Mitchell Field, Higgor Tor and Oxstones. Much of the ascent had to be walked! Altogether there was just over 800m of ascent so not too trivial. Close to home my legs were very heavy and again the pace dropped. I'm happy that even with a cafe stop my pace was below 8:30min/km.

Email ThisBlogThis!Share to TwitterShare to FacebookShare to Pinterest
Labels: hathersage