A tiring week - too much rain too!

I've been on leave from work for the last week. The plan was to start the week with jobs and finish with a camping trip. In the end though  the weather as too grim to bother going to a wet field and the jobs, in this case a DIY project, progressed more slowly than hoped.

Even so I have done some runs and a swim inbetween things. I've felt tired for much of this activity which I put down to being busy! The spike set swim was a little slower than last week and felt tough. I put some effort in for the circuit class and that maybe made me tired for Thursday's run. I only did one swim during the week as I didn't want to spend the time travelling to and from the pool.

Today's long run was planned to be 20km as that's the point at which my right ankle has started niggling over the last few weeks. Today it started at around 12km which I'm putting down to cumulative distance during the week (or the lower drop shoes, there's a quandary). On the way home I skipped Oxstones as it had started to rain and so took some tracks through the plantation. 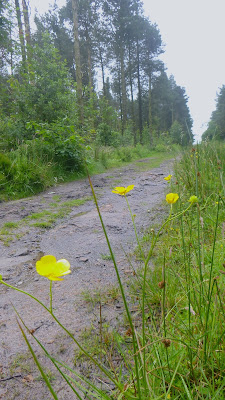 These were a combination of forestry tracks and the track of a gas pipeline. After a km or so they returned me onto the main track for the final stretch home.
Posted by Adrian at 15:29