This week I've exercised indoors and outdoors, on land and in the water. Generally a good combination. Last Friday I managed the longest run I've done in months, it was a massive 15minutes of slow running with 15 minutes of woodland walk. My foot wasn't especially sore over the weekend, just a bit stiff, so I'll take that as a success.

Swims have varied between short sprints in the pool and an open water mile. Once again this is a step up after injury niggles as it's ages since I've done 1600m as a single swim. I can' claim this was a single 'set' though as I had to stop a few times on my second lap of the lake. I think I set off too fast (my watch reckoned 2:12min/100m) and thus it didn't count as steady pace. 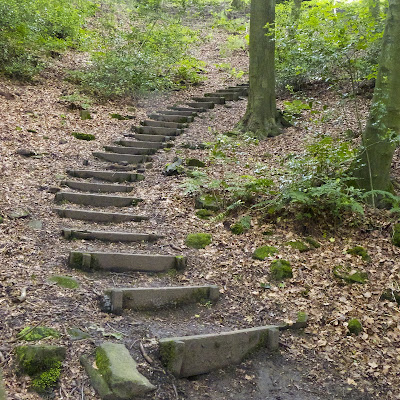 Whilst my Sunday runs have been off limits I've used the tim to walk briskly in the woods. Today I saw the controls for the Round Sheffield Run and used that as a prompt to detour via Wigley Farm. The ascent from the Limb Valley path is very picturesque, the latter half not so much fun with long grass (ticks?) and cattle with calves (dangerous?). I'm hoping these walks are keeping some degree of long-run aerobic fitness.
Posted by Adrian at 18:43