First snow of the winter

The forecast had predicted 'snow on high ground' but that's pretty vague as everyone has their own definition of high. I expected that there would be some flakes over Sheffield and the Peak District as there's a long history of this area tending to be more prone to snow than nearby Manchester or the East Midlands.

When I woke up there was a thin layer in the garden but by the time I'd eaten and got out of the house that had started to melt. The local pavements were a bit slippery in places where there had been patches of melting and re-freezing but once on countryside paths there were no problems. On Blacka Moor there was a good covering that hid the roughness in the path and the cold running water beneath.

Houndkirk Road was unusually busy, the last time I saw so much traffic was in the snow last winter. I don't have any sensible reasons why snow generates cyclists and runners. My pace was slow, as of corset should be on a long run, but my heart rate was reported to be high. I think (indeed hope) the monitor is getting a low battery. Even though I was aware of the usual left knee  / right ankle combination I included the detour to Oxstones as I was enjoying myself too much to go directly home. 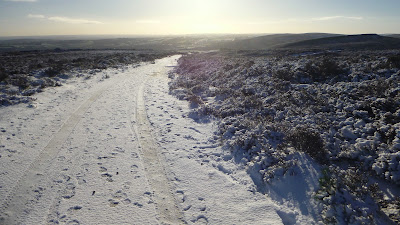 From the summit it's basically 9km of gentle descent back home, although there are a few inclines along the way to tax weary legs. The GPS data showed that I was the slowest I've ever been on this loop. Party that's because I'm trying  to be slow as some of my older, faster runs were at what I now understand to be a race pace and thus not sustainable in a training programme.

Incidentally, the Fuji shoes  did well on their first long outing. They weren't too hard at a slow trot on tarmac and gripped beautifully in thin snow and mud.  The neoprene gaiter didn't rub on my ankle either, that's a real boost.

I am wondering if higher paced road runs are the irritant for my knee. I did one on Tuesday and have known about it ever since...
Posted by Adrian at 17:19