After a long plateau and unsuccessful previous attempts to find a swimming teacher I decided to go for the rather costly Swimsmooth approach. The most convenient coach with space was Julian Nagi in Acton and I went and spent two hours with him on Saturday morning. I've looked at their free online resources and I'd previously suspected I was a 'Bambino' style although that turned out to be incorrect.

Within a few lengths Julian had spotted a number of issues and through the video recording he was able to show these to me. 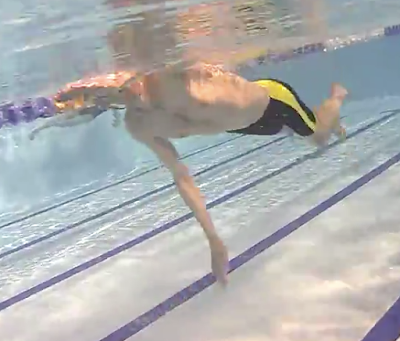 I think that this single frame shows my 3 major technique problems all at once!


Seeing my video footage it was evident to me and it is surprising that at previous classes the tutors couldn't have made these common issues known to me. Of course spotting issues is one thing, the important thing is working to improve them. Before going to there though it is worth mentioning that after only a couple of lengths it was clear that bilateral breathing wasn't working for me. I've written often about a 'shortness of breath' and this was solved instantly by breathing to my dominant right side. We discussed balance, neck pain and power issues and I was advised to try to learn to breath to the left for a proportion of lengths to give balance.

I did a 400m 'time trial' in 10:40 which is 2:40min per 100m which illustrated how big a difference just changing breathing had made (normally I'd be well over 3 minutes). I was also able to work harder and exhaled more deeply naturally without having to think about it! After that we went through a set of drills to improve my kick, mainly to reduce drag. Oddly I thought that I kicked with a neat flutter kick until seeing the video!

Secondly there was some work to allow me to focus on a high reach during the inhale phase to keep a leading hand and again maintain a sleeker profile. Finally we looked at a high elbow catch to help provide forward drive earlier in the catch and reduce shoulder load. By this time I was tiring and this didn't go all that well. This was simply a combination of being in the water for most of a two hour session and having tried two new actions. That is probably plenty for me to have learnt.

Another issue, that isn't related to technique is simply a lack of swimming fitness. I can understand that I need to do at least 3 sessions a week to make progress. I'll have to see how well I can fit this in around running but it would be a shame not to build on the weekend's investment. One thing that should help is that Julian has already sent me an eight week programme with a plan for each session. There is quite steep progression in the programme so I'll need to keep an eye on diet and recovery. I think such a programme will be a great help as previously I haven't had goals and have drifted between classes, the only progression being my rather restricted ideas where to go next.

Overall I was pleased that Julian had shown me key areas to improve and given me the tools to address them. I wish I'd visited him a year or so ago!

Monday marks the beginning of week 1.
Posted by Adrian at 19:16