I wondered today how I'd do over 200m with the ToyBuoy with RHS breathing. I'd expected to be just over 4 minutes as a while ago I'd cracked the 8 minutes for 400m with the BigBuoy. Strangely it took 4:25minutes which was a little disappointing and my SPL increased alarmingly. Basically back to the old more effort and less speed.

So, onto the main set of just over 1100m with tidy controlled bilateral breathing but aided by the ToyBuoy. For this I was pleased to record 2:12min/100m average with a fairly uniform pacing. The SPL rose from 21 to 23. Importantly these results show that with the ToyBuoy I seem to achieve a similar pace with bilateral breathing, focussing, than I do with RHS breathing whilst rushing.
Posted by Adrian at 21:33 No comments:

Back to the spike

It was in 2016 that spike sets last featured in my routine but today it felt to be the right thing to do. Actually it wasn't. I didn't want to swim for much over 30 minutes so started with 8 recovery lengths (so the sequence would be 8+2, 6+2, 4+2, 2+2, 2 cool down) giving a total of 1000m. My plan was to do as many of the recovery lengths as possible with bilateral breathing.

Quite early in the session I could tell that I was still tired from yesterday's swim. The 'fast' lengths were terrible at 2:20min/100m at best! For the recovery lengths I couldn't maintain the bilateral breathing even at a slow 2:40min/100m and ended up pausing in a few sets.

Anyway, I completed back-to-back swims again and put some effort in for both.
Posted by Adrian at 18:00 No comments:

Today's main set was 1267m with the ToyBuoy and I managed to maintain bilateral breathing except when overtaking. The pace was reasonable too at 2:14min/100 with some lengths in the middle of the set peaking at 2:10min/100m. I felt I was fading towards the end and indeed there were some lengths at 2:20min/100m. I thought hard about keeping a high leading arm, getting a good roll and keeping my legs up. Every so often I realised that I'd become careless and my stroke was collapsing but with a bit of focus I go back on track even with some tiring.

Hopefully my neck and shoulder won't be too tired or aching tomorrow.

Apart from a few lengths when the pool was very rough I felt pretty comfortable and am intrigued to see if I could manage that rhythm in a wetsuit in open water. After all, the ToyBuoy is supposed to mimic the buoyancy of a wetsuit.

At some points in the warm up set, without a pull buoy, I noted that I was close to a 2 beat kick but the vey thought of that made me kick a little more energetically.

There is still some progress.
Posted by Adrian at 20:49 No comments:

Trying a bit of pace

I needed a change of approach today and didn't have any aids with me to hope the session pass. I decided to alternate single length fast intervals with two lengths of bilateral breathing. The speedier lengths were pretty good, and I managed 1 in just under 40seconds which I think qualifies as a personal best equating to 2:00min/100m. Just as a note, in previous blog entires I've mentioned achieving this pace but that was WITH a pullbuoy.

For the 'rest' sets I focussed on bilateral breathing with a roll and trying to keep a relaxed style and not rush. Admittedly that distance seemed enough to feel comfortable but I was happy with a pace of around 2:20min/100m.

Using a web swim watch viewer  that displays SPM it was clear that I increased SPM to do the fast intervals beyond the warmup. However I also needed a faster arm turnover for the bilateral breathing sets related naturally to higher SPL. This shows inefficient strokes and probably a panicky approach to breathing with a falling leading arm.

Anyway, progress is occurring. Let's hope elbow is OK tomorrow.
Posted by Adrian at 22:52 No comments:

A little too much?

This evening my left elbow aches more than it has for quite a few months and is perhaps telling me that it's worked a little bit too hard over the last 36 hours.

I started Sunday with 1300m swimming with just over half of that being bilateral breathing sets with no aids. I'll admit that I only did 100m sets on the whole but that's a start. I did one 200m set with alternate lengths of bilateral and RHS only and that was OK.  In the evening I did my elbow/shoulder weights session and was well aware of that effort this morning.

Just to cap it off, after work today I swam again with a main set of bilateral breathing with the ToyBuoy. The smallish pullbuoy is definitely easier than using a kick but still needs some input to maintain good posture (unlike using the BigBuoy that makes things far too easy). I was happy to keep a pace of 2:12min/100m for that with some lengths better than 2:10min/100m.

Fortunately on the way home I had a physio appointment and so I've had the various tight spots around my shoulders and forearm massaged out leaving a little tenderness around the elbow. As usual we had the talk that this means I don't have a classic tendonopathy and can continue training; although a rest is divided tomorrow.
Posted by Adrian at 21:05 No comments:

I've run both days this weekend, just as I have for many weekends before. Even the same routes! Both runs have felt very hard work, my legs have been heavy and lacking power whilst overall I've felt simply tired. I pushed on, walked as necessary and both days I've completed at pretty much the usual pace.

I wonder if I can blame swimming for my lethargy, at least in part, as this is the first week that I've swum for over an hour in the week since May. Some of that swimming was done with the ToyBuoy but it was still exercise and I have been trying to 'engage the core' and 'lift my legs' throughout so it will have had some impact on me. It is notable that my faster Sunday runs tend to be when I haven't done a run on Saturday; the back-to-back arrangement is tiring. 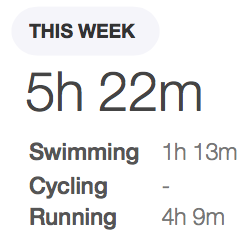 It's also been arduous at work and I've even had to do some tasks over the weekend, which is quite unusual for me, so I suspect my 'stress bucket' is overflowing.
Posted by Adrian at 18:08 No comments:

After a hard day writing a lecture I just had to go swimming yesterday. I'd half planned to do it but didn't have a pull buoy and didn't bother taking the snorkel. That meant I had to swim unaided! I set myself a 1000m target with an intention to do bilateral breathing whenever possible after the usual 200m warm up.

I found that I could only manage a 3 stroke cycle every 5 breaths or so, meaning a few times per length. Certainly my stroke was scrappy and I could tell that I was letting my right arm fall as I breathed to the left. I also felt that the first stroke after such a breath was ineffective. I don't think my roll was well controlled, especially to the left, which always felt like a heave to breathe rather than smooth positioning. Anyway, after 26 minutes of struggling I'd completed the task. This wasn't an attempt at a time trail, more an exercise to see how much I could cope with bilateral breathing. Not very much it appears without a pullbuoy.

This morning I awoke with a stiff neck which has been troublesome all day despite some attempts to stretch. Now I'm trying to decide whether the pain has come from doing 80% of the swim with unilateral breathing and struggling to do 20% bilaterally and badly. Until I hurt my elbow I did nearly all swims with unilateral breathing but I'd built into that. Recently I've been focussing on bilateral breathing in various guises. So perhaps I simply twisted to the right too much. I hope the muscles relax overnight.
Posted by Adrian at 21:28 1 comment: