As I had time on Sunday morning I chose to do the long Session 2 rather than short Session 1. In the last few weeks I've taken to using the TempoTrainer Pro to stage the sets and today aimed for 46, 45, 44 and 43 seconds per length. Previously I've struggled to keep to 43s and recorded times around 43.7 seconds. Today was 44.1 seconds so a little slow. My excuse is that my arms were tired from DIY over the weekend.

I went into the second superset fairly fatigued with a plan to try 48, 47, 46 and 45 seconds. Pretty much I was stuck at 48 seconds! For the final set I decided to try to pick it off in 100m sets. I managed one at 45 seconds, largely helped by a good first length at 42 seconds, but then faded to 47 seconds despite a stroke rate of 33 SPL. Worn out sums it up.

This Session is hard work and seemingly I'm not improving.
Posted by Adrian at 22:46 No comments:

With my Garmin Swim on it's way to meet its maker I've been trying the SWIMTAG system that they've subscribed to at the Goodwin Pool. With two swims stored I'm pleasantly impressed. The basic scheme is that you show your membership card and the staff member lends you a 'watch' from a stand. This process links the swim to a personal web-based account. 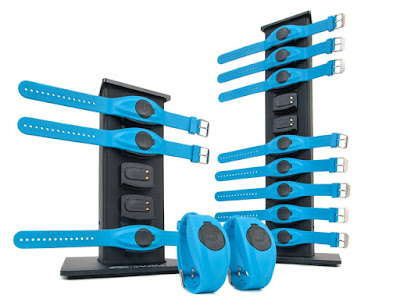 The tag doesn't give any dat during the swim, just a red flashing LED that presumably indicate that it's working. After the swim when you return the watch to the attendant the swim data is uploaded and processed in the the cloud into a swim.

You can only register after your first swim, I suppose to ensure that registrant must go to a participating pool. It's also possible to set up an auto upload to Strava. This is a bit limited as only total dat is sen, not detail of sets. Whilst we're on sets, these are detected automatically based on a pause in rhythmic swimming.

The image above shows how short pauses are identified as a single length and a longer pause as a 'set'. There are no buttons on the tag to record anything. This view shows the 'editor' that allows users to merge or split lengths that have been incorrectly defined by the software. Unfortunately there doesn't seem to be a way to define a set manually.

My swims have been at a spread (slow) paces and with a gradual loss of technique. I've had to slow down during a length ad occasionally had to do a few strokes of breaststroke to stay behind in a lane. All of these variations have been recorded accurately.

Naturally SWIMTAG has a plethora of social media features including friends, virtual races and challenges.

Overall the key part of the system, that is swim tracking, seems more reliable than the Garmin Swim and the online processing a clever way to be able to update the analysis algorithm without troubling the pool staff.

Email ThisBlogThis!Share to TwitterShare to FacebookShare to Pinterest
Labels: swimtag

Despite being tired after work I attempted the designated session. I don't think I've ever achieved the stipulated 1:54min/100m pace across the 100m sets and today was no different. For a couple of sets I was obstructed but even the clear lengths rarely surpassed 2:00min/100m, although I really did try! By the final set I'd dropped to 2:07min/100m
Posted by Adrian at 17:00 No comments:

Email ThisBlogThis!Share to TwitterShare to FacebookShare to Pinterest
Labels: swimtag

I"m fed up with my watch but on trying to return it for a paid repair I have discovered that they think it's in warranty. 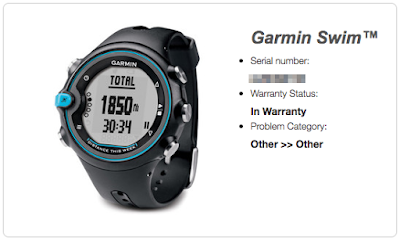 The T&C say one year so I'll bet they soon change their mind...
Posted by Adrian at 17:48 No comments:

It was back to the cold water of the Goodwin pool this weekend to carry on with my September routine. The 'long' Session 2 is my least favourite and today I ran out of energy before completing it. I suspected that the Garmin Swim would fail (I wasn't disappointed) and therefore tried to work well with the TempoTrainer. I managed sets of 45, 44, and 43 seconds per length for 400m but couldn't achieve the 42s pace. I tried breaking it into shorter sections but I don't have the data for how well that worked. I set out to do a second super set of just slow and fast 400m sets. The first at 47s was manageable but I failed to keep to 45s for the second. That was a bit feeble!

I went along with only a little breakfast and after Saturday DIY and a run so perhaps I wasn't at my best. I noted that I had a little tingling in my arms for the first few warm-up lengths but it faded.
Posted by Adrian at 10:00 No comments:

Once again Heeley Baths seemed attractive and I was there at 07:30. It wasn't all that busy and I managed to work well with the warm up in the medium lane and then my fast/slow sets in the fast lane.

I'd set the Garmin Swim to 23m rather than 25 yards so that I recorded metric data throughout (really should be 22.86m). I set the TempoTrainer to 28s but gradually reduced it. I'd forgotten the precise system for Week 12 so started off with alternating 100 yard slow/fast sets. I gradually reduced the length indicator to 25s and was able to maintain that, which seems to be 1:49min/100m. Later in the session I tried to carry on over 200 yards as a single set and struggled to keep up with 26s, or 1:54min/100m.  This is all fine as 1:54min/100m is the target pace for a 25m pool so I'm not far off. Having been to Heeley a few times now it is pretty clear that I'm faster in a short warm pool than a long cool one. The length element is well known, the heat is perhaps surprising.

Rather annoyingly despite making an effort to keep my laps in order the watch did not record the data properly once again. I'm sure I selected SAVE at the end of the swim and my weekly total incremented. However the session does not appear in the list and cannot be downloaded. So the observations above are the extent of my analysis. 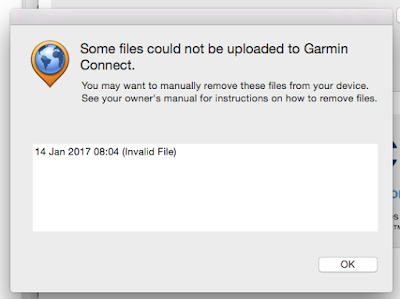 This screenshot confirms that there really is a session in there but it can't be accessed. I've emailed Garmin Support UK and wonder what the outcome will be. Unfortunately I'm not committed to any of the new multi-sport watches as they are too large and too costly. There are some Suunto Vertical watches on special offer and although I'm tempted, they are large and are reported to have less than ideal GPS reception.

I started today's session early in the day having been blessed with a day of annual leave. Hopefully that meant I wouldn't be too tired to complete the sets well. Naturally I forgot my plan from last week  and set off at 47s per length with a goal of 47, 45, 43, 41 seconds. The data show that I achieved 47, 45.3, 44 and 43.7 seconds which was unfortunately a spot slower than last week even though I had a gentler start. Really, 47s is a bit too slow as I have to wait at the end of each lengthFor the second super set the outcome was 47.3, 46.7, 47.3 and another 47.3 seconds per length. As in Week 11 I had no more energy in my arms and was mostly a little slower across the board even though I had fairly clear pool. Looking back at my performance in this session across the programme my progress is disappointingly slight...

Today I was supposed to have gone for my SwimSmooth lesson but it was cancelled, which is a pity, but it gives me a little more time to reinforce the slight gains that I have made.
Posted by Adrian at 18:14 No comments:

Today's warm-up 200m was a PB at 4:51minutes which is quite satisfying.

For the routine of alternating fast and slow lengths things went well too. I lost 6 lengths or so due to poor button pressing but most of the data was sound. Mid routine I achieved 34.5 seconds for a length which is probably a PB too at 1:44min/100m. By the end of the session my last length was just over 40s so I achieved my goal of keeping under 2:00min/100m.
Posted by Adrian at 20:44 No comments:

I walked to the Goodwin pool first thing this morning only to discover that it's still 'vacation' and so not open. Oh well, at least I had a walk.

After some work in the house I found that Heeley Baths was open at lunchtime and so took advantage of their 25 yard pool. There were few swimmers, little turbulence and with frequent push-offs I recorded some record times.

Previously I've thought that the 8:00min 400m time trial won't happen, but this has given me some hope that when I'm not tired, and in a shorter pool, that I can achieve the pace. I'm tempted to go down to try tomorrow...
Posted by Adrian at 16:02 No comments:

Looking at my exercise summary it's clear that I've had a bit of time my hands. 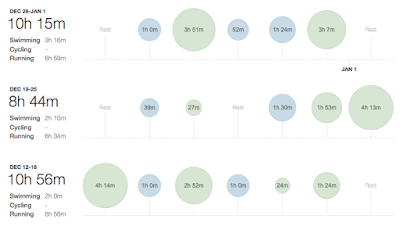