I was still tired from yesterday's flooring and slow run. I really felt that the swim was tough even though I kept the pace down. Still it was 52 minutes of practice. My focus on reaching my left arm is slowing me down a little bit but will hopefully yield benefits in the future. Even though my with-legs set was shorter than last week's my pace was down; well I've acknowledged tiredness.

On the with-legs set I've noted that my SPL varied between 24 and 27, usually the higher SPL being linked with a slower pace. I was conscious of adjusting my stroke in terms of reach, and position and forearm catch but of course I can't recall what I was doing in relation to the timing. Maybe some careful short sets are needed to try to link things together.
Posted by Adrian at 20:18 No comments:

Over the last few weeks my time on the Dore Moor Road Loop has dropped steadily. Today though, as I set off my legs were as heavy as lead; probably as I'd spent most of the day kneeling to lay flooring. The 13km was a struggle and not surprisingly my time was the slowest ever. At least it didn't look as though I'd stressed my heart much.

At least I went out and did some distance even if it hasn't been a major gain to my training.
Posted by Adrian at 21:18 No comments:

Today's 'sprint' training session was a success, especially early in the sets. 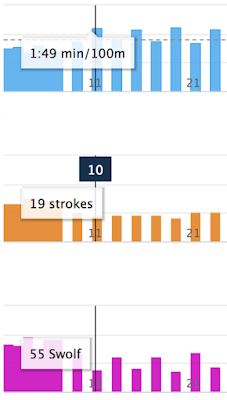 My pace faded across the brief 28 minutes but importantly a number of the 'fast' lengths were completed in the same number of strokes as the slower ones. Previously I've suffered from an increased stroke rate having less effect on pace than hoped as the strokes per length increased too. This is pretty common and all but the most expert swimmers tend to do this. Anyway, my short-lived ability resulted in low SWOLF scores.

For the first set, as this excerpt shows, even with a dramatic increase in stroke rate from 5SPM to 60SPM I completed each length in 18 or 19 strokes. This equates to 1.6m per stroke (assuming 3m push off) compared to my wrist to wrist span of 1.60m see this link. This looks like a good 'efficiency' performance, but is, after all, achieved with a pull buoy. I's worth noting that by the end of the session my SPL had risen to 23 for fast lengths and so my pace had fallen markedly.

Julian has stressed that for this block I need to keep a good reach, especially with my left arm, and the initial lengths have shown that a relatively low cadence with good style does work for me. Collapse of my leading arm during breathing is an issue for me.
Posted by Adrian at 21:29 No comments:

At least there is a distinction between 'fast' and 'medium' although there's a clear fade towards the end of the routine.
Posted by Adrian at 10:15 No comments:

Since the New Year I've returned to a road run loop though Dore village that I first did in the winter of 2013. In the start of 2014 I achieved some good times, including my PB but during the summer I had to cut back, due to a minor running-induced injury, and this 'tempo' session went. I tried the route again in the autumn of 2016 and managed quite a good pace but then lost the pace.

Over the last 6 weeks or so I've put some effort in, partly with the physio's permission that if the week's total is low, there can be more speed. I've regained some of my previous pace and the trend is good. If I can lose a minute I can achieve a sub 5:00min/km pace which would be nice, and something I've not managed in 3 years.
Posted by Adrian at 18:30 No comments:

In my new programme Session 2 is a long swim with options for breaks but no element of speed. So today, being a bit short on time, I decided to swim without a pull buoy and drag my anchor-like legs along.

Within my time limit I managed just under 1900m with a gradually decreasing pace.

I was well aware that I was fading by the end of the swim. 2km would have been easily achievable but I wouldn't have looked forward to 3km! Looking back at previous data there has been a great improvement in pace for 1500m swims:

I was in Acton on Monday morning hoping to break my 8:00min barrier for the 400m time trial. Once again I missed by a few seconds. I'd agreed with Julian to use the TempoPro but couldn't keep with it. Somehow I was tired.

Later we explored pace and oddly, my easy pace at 51strokes per minute could develop into faster 1:52min/100m pace with a stroke rate of just 58SPM. Stroke rate in the time trial had been over 70 and this was clearly inefficient.

We've agreed to split training sessions into long slow ones and sprint ones. I'd found the gradual progression last block to be very tough although it turns out that I'd been setting a steeper line than Julian expected. 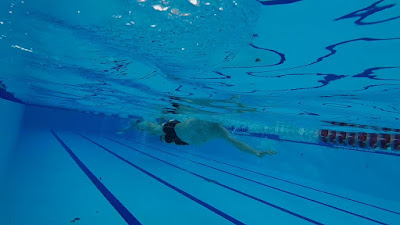 Email ThisBlogThis!Share to TwitterShare to FacebookShare to Pinterest
Labels: swimsmooth

I lost a few lengths this evening but that was due to careless button pressing rather than failure of the Garmin Swim. In the first set I did well as each of the 6 fast lengths was at a pace better than 1:50min/100. The second set appears to have had the same trend but that was where the data was lost.  Set three achieved 2:00min/100m but for the fourth set I couldn't quite manage that. Altogether though that wasn't a bad performance, especially as the warm-up was just with 5 minutes.
Posted by Adrian at 22:54 No comments:

For some time I've been using a maximum heart rate of 172bpm but this evening's run implies that I could be capable of being closer to 190bpm. 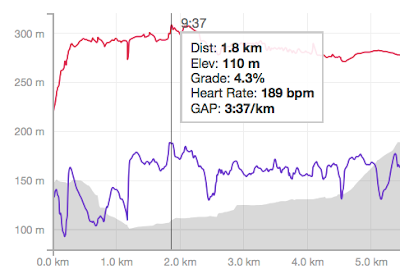 My attempt to have a decent pace along the Millhouses Park 1km Strava segment gave couple of points above 185bpm. Oddly I didn't reach anything like this heart rate ascending to Dore but there I'm limited by leg power too.

Certainly this run was better for not being over dressed although a pair of gloves would have made the time more pleasant. Looking back at my times on this 12km road loop I'm disappointed that I can't achieve times that I managed three years ago as a much more inexperienced runner. Is this due to being 3 years older or too many plodding-paced runs?
Posted by Adrian at 18:00 No comments:

I like session 1, it's simple and short. The aim is to work as hard as possible every alternate length. Although Julian says to ignore the time, I do like to note whether I've beaten the 2:00min/100m barrier that seems to exist for me. Well for 17 out of 18 lengths I did achieve it.

Then I went to finish off with 400m alternating fast and slow without a break between them. I only surpassed 2:00min/100m for 1 of 6 lengths this time but the set came in at 9:04min for 400m which at one time was the best I could manage for my 400m time trial at the start of a session. There is progress.
Posted by Adrian at 18:45 No comments: