The interval swim showed very nice distinction between slow and fast lengths but this was perhaps due to the background pace being a little slow than usual. There was some fade too! At least I managed a few lengths faster than 2:00min/100m and some very close to that pace. It is possible that I'm tired from circuits yesterday evening as it was quite demanding, especially of the core muscles.

I thought the warm-up had gone nicely but that was on the slow side too. I know I can break the 5:00 'barrier' but it is there once again. At least today I did pick up pace over those 6 lengths rather than start fast.
Posted by Adrian at 17:57 No comments:

So it's Tuesday again so I made the effort to do some faster running even though the weather was hot and sunny. I based my run in the woods but left it to take a steady tarmac incline rather than a more uneven woodland path. Today's pace data is far more in keeping with my goals and is made easier to interpret by setting the lap on my watch.

Five high-effort laps are clear, separated by recovery periods and book-ended by a warm up and a steady run home. The Zone 4 and Zone 5 intervals are just over 10 minutes in total.

I wonder if my heart rate zones are set incorrectly as I didn't record anything over 156bpm despite pushing up a slope as hard as I felt able.
Posted by Adrian at 19:30 No comments:

I'm on an extended block as I've not been able to book in with Julian. Today was the long swim and pacing was consistent although not snappy.

Part of the Round Walk

Today's weather forecast was grim so the Round Walk  seemed to be an obvious destination. I chose the eastern two thirds so as to avoid my usual routing. Overtime I do parts of this circuit it amazes me how hard it is. I think it's due to the repeated small ascents. I didn't watch the heart rate monitor closely but followed a perceived effort more closely as some of my recent reading has suggested that might be more reasonable whilst trail running.

Anyway, once home and having recovered the data, my heart rate was pretty much what I'd aim for on a long run.

Having started with an indifferent (or even poor) weather forecast, the morning turned out quite pleasant and there was an excellent view of urban Sheffield from Bishop's House.

Email ThisBlogThis!Share to TwitterShare to FacebookShare to Pinterest
Labels: @theoutdoorcity, Sheffield Round Walk

During the Bay Challenge I came to the realisation that I lacked power for when the going gets tough. One of the books I've been reading comments that ultrarunners tend to work close to their VO2max. This sounds like a good thing although the problem is that their VO2max is low due to too much low intensity training. Or rather too little high intensity training.

Even though I can barely call myself an 'ultrarunner' I don't do hardly any intense training.

It's great to do long runs into the Peak District and they do have a training benefit; perhaps much of it being psychological, mostly a confidence to keep on going. That knowledge enabled me to settle into a routine to complete the Bay safely but my lack of cardiovascular and musculoskeletal power was glaringly obvious whilst running into a strong coastal wind.

With this in mind I started with an interval session today and considered that I'd worked hard. Looking at my pace and heart rate data I was shocked/disappointed to find both were low! I knew that my average pace was mediocre but hoped that there were peaks of speed. Maybe next time?
Posted by Adrian at 21:13 No comments:

I'm into extratime beyond my 12 week block now as I couldn't arrange a session with Julian for a few weeks. That gives me an opportunity to consolidate my progress.

Today's long swim started very leisurely, I suspect that I am still tired from last weekend's run and the activities since then. I made an effort in the third and final set and pulled the pace up a little so the net result was fairly consistent pacing. A little slower than some weeks but within my current variability.

I think my lethargy passed onto my Garmin Swim watch as it missed counting many laps. The worst ever! I spotted the error after the  first set and ensured that I did a good push-off at each length thereafter. That didn't seem to make the slightest difference. On previous occasions when lengths have been missed I've been going with long slow strokes and I suppose that was the case today too.

Must try harder!
Posted by Adrian at 21:58 No comments:

It's rare for a race cut off to be a matter of life and death but for the Cross Bay Challenge it truly is. This half marathon route crosses Morecambe Bay, a 'short cut' that has been in use for at least 700 years. I understand that every year the course changes to reflect a safe route across the river channel and quicksands that make any crossing of the Bay treacherous. This year the start was moved north 8 miles to Silverdale so that the River Kent was fordable.

The date is selected to be the weekend day with the deepest low tide at mid-morning giving a window of 4 to 5 hours to cross. That time is then shortened by the need to place way markers and have the safety team in place and you're left with a 3 hour cut-off.  That seemed a pretty achievable time even allowing for running on sand and mud. 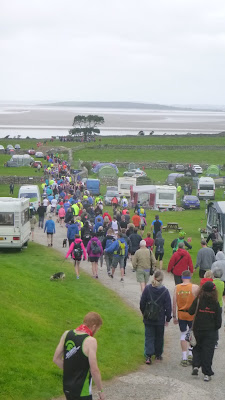 The registration area was vey well organised although almost everyone seemed to be very cold by the time the race briefing got underway. At last we were allowed to start and within a short time we were in the water, much deeper than I'd anticipated.

By the first mile marker I was tired. I'd set off cold and stiff, I was wet and more cold and to make matters worse the route was directly into a 30mph wind. By mile two I had an abdominal cramp and wondered how I'd ever finish. I recalled all the advice I've read and decided to walk as required, keep taking small drinks and try to eat something. Really I didn't need to eat and my mouth was too dry anyway. 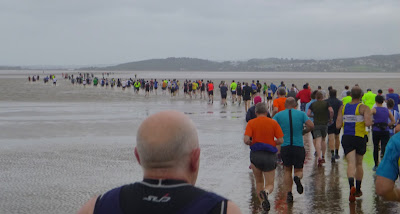 The 200-plus runners gradually made a snake curving across the sands and from an early stage the leaders were visible as distant dots, converging on the next strategically placed tractor.

I chose a plan of two minutes run and a minute walk and counted this strictly to myself. This worked and I gradually started to catch up with runners who'd passed me earlier. My abdomen settled, my breathing seemed less strained against the wind and eventually a 3:1 cycle felt right. With this rhythm the miles started to pass. Eventually I reached the 8 mile marker. For a little bit I'd expected a turn back to shore as we'd been heading offshore, into the wind since we started. This was it, a welcome relief. 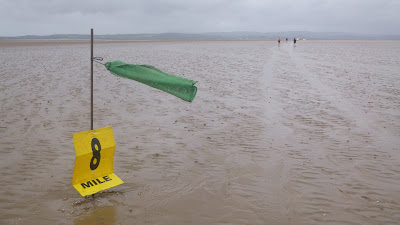 Now the wind was to our left and there was a psychological boost that the path was towards the finish, which was just visible on the horizon. A 5:1 cycle was now achievable, albeit interrupted by small water crossings. I'd decided that it was far too much effort to run through anything over ankle depth, again this was a successful plan.

The final few miles became easier as the wind played on our backs and the finish solidified from a mirage. Then I could keep up a reasonable run pace. 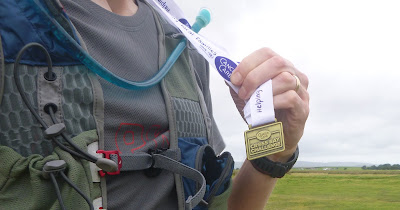 After 2:25 hours I crossed the timing mat feeling very relieved and very slightly disappointed at my time; although considering how I'd felt during the first 15 minutes it was a good result. Being in the top half is good enough and completing such a unique race, reward in itself.

The scenery is so unusual that I spent a few minutes every so often just looking around, but the vast flatness can't be readily captured in a quick snap. 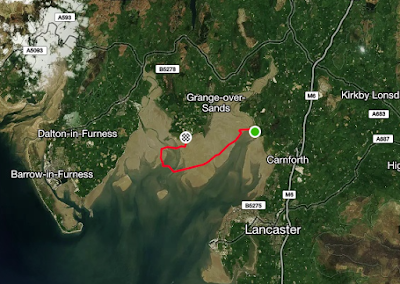 By comparing the route and my pacing splits it's clear how much effect the wind had on me and perhaps, unbeknown to me, I'd worked far too hard in the second kilometre. Luckily I took action early enough to not become too tired.

I recommend this run both for its 'challenge' (definitely an example of 2nd degree fun) and the charity it supports.

Email ThisBlogThis!Share to TwitterShare to FacebookShare to Pinterest
Labels: half marathon, morecambe

I've completed the last 'long swim' in the current block although it'll be a couple of weeks before I go for my next review lesson. Today's pacing was good, both consistent and a little bit more rapid.

There was the usual fatigue but by working hard in the 3rd set it doesn't look too severe. There is some variation in pace as the lanes were a little busy at times and so I was occasionally held up, and occasionally work to accelerate past. 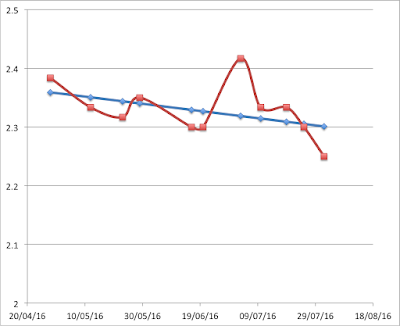 Looking back over the block of 12 weeks there's a distinct improvement in pace although it's uneven and only of the order of 8 seconds/100m from start to finish! Having said that 3.5% gain isn't bad, this article suggests that over 10 weeks an average improvement of 2.5% is reasonable.
Posted by Adrian at 21:17 No comments: