We're away in Pickering for a few days and an online search revealed Ellerton Park to be a relatively nearby open water venue. Sure, Gomire Lake at the base of Sutton Bank was closer but the reviews aren't all that favourable. Ellerton is actually quite a drive from Pickering and not open road so not suitable for nipping back and forth to!

The venue isn't very well signed but following 'lakeside parking' was the right thing to do. The opening times online are basically all day which imply little safety cover and that seems to be the case. The owner, Mr Thompson was in the car park in his pickup collecting the fee and checking for comings and goings. He had binoculars but I suspect they were to monitor the carpark from afar rather than mount a rescue, although I'm sure he'd help if he spotted a problem!

There's a smallish changing block with showers in the carpark. There were 4 of us arriving at a similar time and so there was some company in the water. Three buoys mark out a 500m loop but when the numbers are low there's no compulsion to do a particular loop, although I chose to follow around anti-clockwise to avoid impacts! I was told that some sunny days there have been 100 swimmers, which would be fine in the water, but might make the land-based facilities a bit crowded. 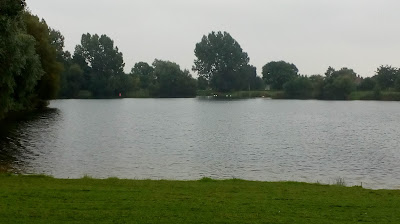 The lake is claimed to be clean and clear, subjectively it was although I can't vouch for it's quality. Naturally there are weeds around the edge and a few trailing branches if you get too close to the bank. Entry and exit is via a wooden jetty and this didn't give me much opportunity to acclimatise as a kayak group were needing to use the steps too. I was told that that water is typically around 16 degrees in the summer.

I swam a leisurely 3 loops to complete around 1 mile. One of the 4 initial swimmers was still in the water as I left, keeping up a good pace.

The casual, open-ended timing is the lake's greatest asset that I can see, so long as you don't need close supervision. To that end, wetsuits are compulsory which reduces the risk somewhat.
Posted by Adrian at 11:33