I'm back home after spending a tiring, but stimulating, week in the Costa Brava with SwimQuest. As a novice open water swimmer the thought of 2 swims each day in a salty sea was slightly anxiety-inducing but I really wanted to move beyond small lakes. This Spanish trip seemed ideal as it fitted around work commitments, my wife and I like Spain, and it was one of the cheaper trips in their brochure.

Really the swimming trip is only 5 days, which was enough to make me wish I was able to stay another week, but not so much that my shoulders couldn't cope. We travelled on the Friday before the 'official' start so that we were there in good time, enough for a restful day. We flew into Girona and then took a taxi instead of doing a 2 leg bus journey. I suspect that flying to Barcelona and taking the bus to the resort would be cheaper although perhaps more risky for travel sickness.

I won't bother reviewing the accommodation at Ciutat de Palol as I don't believe that SwimQuest stay there routinely; suffice to say that it was sufficient.

On the programmed travel day we strolled through the shops, returning along the promenade of Playa de Aro and continuing a little on the coastal GR92. 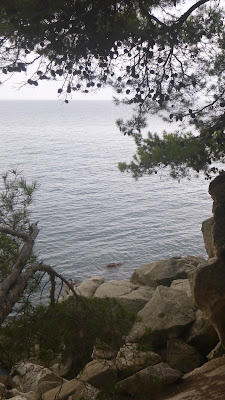 The town has a number of quite upmarket shops, many selling women's clothing and just as many vaguely european restaurants with similar menus. Once on the coastal path I could see why the hike is one of the more popular Spanish trails.

In the evening the swimming group met for drinks and dinner, after the typical introductions. Around half the group were from London and knew each other well which could have been a barrier, but they were very welcoming.

At the briefing it was clear that I was the novice swimmer having only a season's open water experience and none of that in the sea. Others in the group had little sea time but were strong pool swimmers of many years. 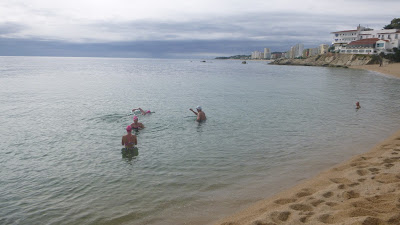 At the nearby beach I swam half as much as everyone else as without wetsuit or pull buoy I was slow, cold and a bit overwhelmed. John (Coningham-Rolls, founder of SwimQuest) recorded with a GoPro to analyse before dinner, but we missed that time slot. I suspect my stroke was closer to doggie-paddle than a decent freestyle!

After a buffet lunch we went to Sant Feliu de Guixols for a 2.7km out-and-back swim. 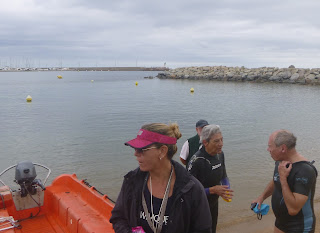 The coastal swims are those defined by Vies Braves although as October is seen as the end of the season, in many cases the indicative buoys were removed. 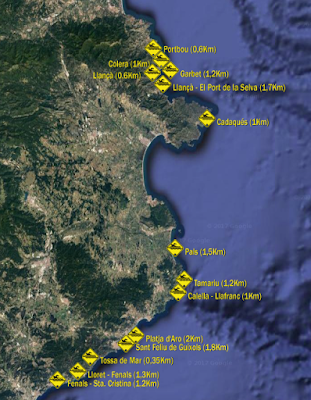 As the slowest swimmer I was first in which was only slightly intimidating especially as a distinct swell was present beyond the breakwater. Mia was just behind in the kayak which was a comfort. Although I felt slow I'm pleased to find that I'm not the slowest swimmer recorded on Strava on tis swim by quite a margin.

I woke with some stiffness and soreness in my left shoulder, which I've experienced before. This suggested to me that I'd done slightly too much yesterday, so today I decided to do just one swim.

Platja de Santa Cristina is a beautiful bay to the south of popular Lloret del Mar and easily reached by minibus from Playa de Aro. 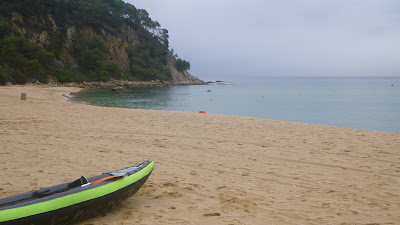 The 2.1km swim was picturesque but I was a little slower than yesterday and very pleased to return to the beach for a picnic lunch put together by Mia. After that I strolled along the path towards Lloret above the route we'd swum that morning.

Today there was a general strike in Catalunya in protest at the police violence at Sunday's (illegal) referendum. Most bars and cafes were closed but luckily a few were open providing refreshments to weary swimmers.

The 2.6km swim from Tamariu was especially pleasant as we had time to land on a nearby beach for a few minutes. Previously we had swum for a time, or to a promontory, and then  returned. My pace was a little higher today and I got better at stopping my watch at rest points so as to show true swimming pace. 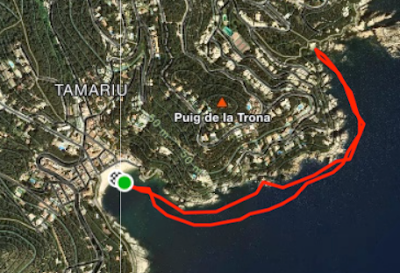 After a picnic lunch and a short doze we headed to Llafranc for a shorter 1.6km swim to a headland having passed between a few rocky outcrops.

By now the water flow through my wetsuit had increased as a seam had opened on the right forearm. More on that here...

A 4km swim was planned for today as a prelude to tomorrow's up to 8km marathon set of swims. As we cleared the bay at Platja de Sant Pol the swell increased markedly, to a point at which it was felt unsafe to continue around the point.

We cut across the mouth of the bay and completed a circular swim of 2.3km back to the beach. During the return swim I felt 'in the zone' and John noticed the improvement in my stroke and commented upon it. My aching shoulder had relaxed and I was focusing on good torso rotation to facilitate a forward reach on both sides. For 400m I managed a pace of 2:16min/100m, although after that things fell apart for a bit as I lost the relaxed stance and tried too hard.

During the 'rest' afternoon we walked to Castell de Aro although everything but one rather run down bar was closed. There's a castle art gallery, a church, a doll museum and a minature railway but can't report on them at all! The town itself was pretty and very well kept. 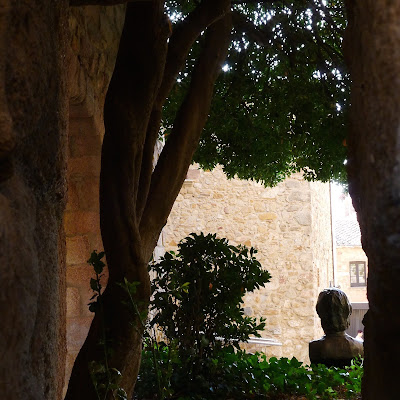 Even whilst walking I knew my arms were tired, both shoulders felt well worked which I took as a good sign of fatigue rather than injury. We'd heard that tomorrow's swim wouldn't be the 'challenge' with Vie Braves but would still aim to be stretching for all.

Today we headed to the Cap de Creus Natural Park which was at least 90 minutes drive. The lengthy journey did nothing for my confidence which felt a bit low as I was tired and with an aching left shoulder (ibuprofen gel didn't seem to be helping it). An accompanying RIB joined us at the lovely Platja de Cau del Llop for a 3.4km out-and-back swim. 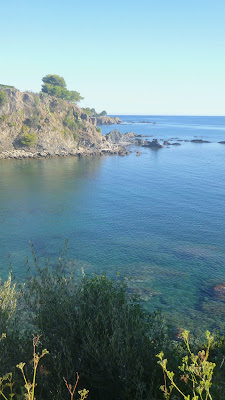 Outbound was fine but the return leg, especially the last 1km, was tough. Although I kept my pace up my perceived effort was high, my shoulders stiff and technique horrible. My stroke length fell by at least 10% to 1.18m and I was digging deep to keep going. I wasn't sure I'd manage another swim that day.

We moved on to another pretty beach at Garbet for lunch and a snooze. The sun was strong and I sheltered in the van which was pleasantly cool with a through draught. 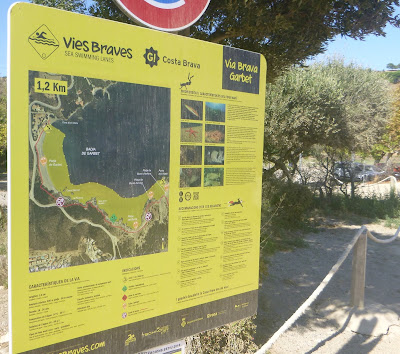 Outbound, for my 1.9km swim, we followed the coast into a small beach where the nudists were surprised to see us floating offshore . Whilst some of the others carried on with a larger loop around the bay I headed straight back to the starting beach. Somehow, knowing that I planned to complete my swim there, I settled into a good rhythm again and achieved a pace of 2:17min/100m with a nice long stroke length of 1.37m across nearly 900m of open water.  I'm not sure that I could have managed a longer distance swim, but finishing with some tidy swimming felt positive.

There was a little discussion about a third beach but really there wasn't time, and that proved to be the case as the journey back to base was a little troublesome. Nonetheless there was time to get kit tidied and a shower before the trip to the restaurant. The evening meal was good and helped by a fabulous sea view which revealed a glorious harvest moon. 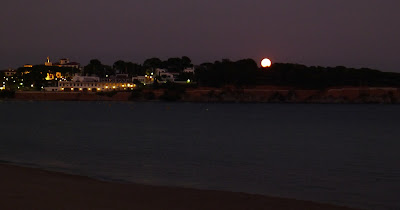 I had great experience and achieved my goal of more swimming than I'm used to, in a new salty environment. The salt water was far less of an issue than I expected and although my goggles were perpetually misted-up or streaked I didn't get sore eyes. The buoyancy from the salt in combination with a triathlon-style wetsuit helped my body position considerably and most of the time I left my legs to trail. I tried using my large training fins but they were floating so high as to be useless.

The organisation of the swims and safety cover by John and Mia was faultless and I felt in safe hands whilst being able to work close to my physical and skill limits. Before the holiday, and in the early stages, some of the information could have been more clearly laid out but this shortcoming wasn't important; it's just that I like to be ultra-organised with dates and times!

Since returning home I've looked at the SwimQuest brochure online and I'm considering where I'd like to go next and what I could achieve at the different locations. I suppose that is the best recommendation of the holiday.