It's a few years (actually a few more than I thought) since I last tried one of these fell- based orienteering events. I suspect that I'm inherently cautious and reluctant to leave my comfort zone. However I do like a challenge and the combination of a new location and some navigation makes for a good morning's exercise.

The start was a good trek up from the parking. Apparently this half hour was going to be in the event but the organisers felt that runners would be unlikely to finish in time. The ascent revealed the remains of an inversion and mist on some peaks. To the north of the A57 the moor was wet but passible. There were few paths but the checkpoints were fairly easy to find on a bearing although progress between them was slow for me and some other runners in a similar schedule.
After crossing the road the terrain was steeper and the checkpoints scattered on and below the edge of the Kinder plateau. I picked a route that looked manageable both physically and in complexity with the mist now blanketing the area. Two checks needed a tough ascent and then there was an obvious route to the finish. 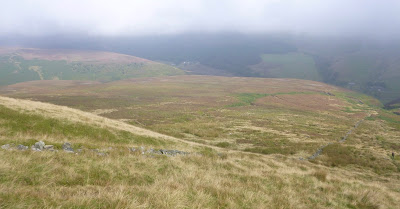 I managed to squeeze in a check which was close to the path. During the descent there was an option of a check but as I wasn't sure of it's position in the mist I decided to miss it and hopefully avoid a time penalty.
I finished with a few minutes in hand and mid-placed in the field. I'm amazed that some competitors managed to reach all points. I walked most of the 14km of my route but running the majority of it is unimaginable to me. Their navigation must be fast and accurate too!
Posted by Adrian at 14:25