We've been to Pembrokeshire for 5 days for a bit of rest and sunshine. After a long journey I went for a short, unsuccessful run from the hotel. One footpath was blocked by rather hostile calves, cows and bullocks and another was terribly overgrown. My third choice of route had ground churned by hooves concealed by long lush grass. Being a coward I slowed to a brisk walk but even so I managed to tweak my left ankle. I couldn't call it sprained as I knew at the time it wasn't that bad, and now I know for sure, but it hurt and promised to impede holiday walks and runs.

I don't think it did adversely affect the two walks we did although by the end of the second I was aware of it. The coastal path is well made and has some great views, it's probably easier terrain than the Cornish equivalent.

I'd hoped to manage a short swim (or even 'dip') in the sea at either one of the popular beaches or a tucked-away cove but didn't find a good opportunity. I need to get into a habit of having kit with me, either in my rucsac or the car. 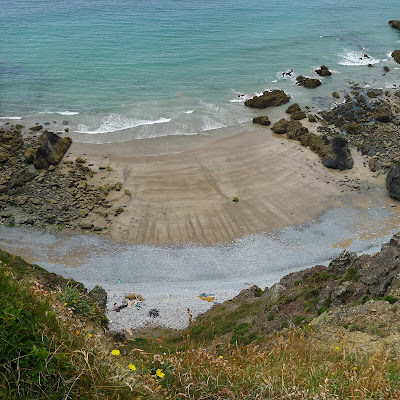 The coastline certainly has lots of well known swimming spots although I was slightly put off by a colleague mentioning that one of their son's workmates had been swept away whilst swimming near Tenby. The popular places are quite spread out across Pembrokeshire and therefore not always very accessible as travelling around is fairly slow.
Posted by Adrian at 19:41