Before heading to Cornwall I'd made contact with Tom of Sea Swim Cornwall  and had a flexible arrangement for him to lead a swim. Today wasn't ideal for either of us in a way but later in the week I'd find that the weather would be even less favourable. At first the plan was to swim between Newlyn and Penzance but by high tide the sea was far too rough for me. The wind direction made Carbis Bay preferable and so we headed across the peninsula and quickly got changed.

The sea was rougher than I'd find ideal but outdoors you have to take what there is. It was also a little cold, my watch said 13°C but the TV forecast said it was a bit colder and I certainly suspected that it was. We headed west along the bay towards the headland having agreed that a 30 minute swim would probably be enough. After a brief pause we turned back and it was then apparent that there was a headwind. Making headway became hard work against the waves and later analysis of the data showed a much reached distance per stroke. 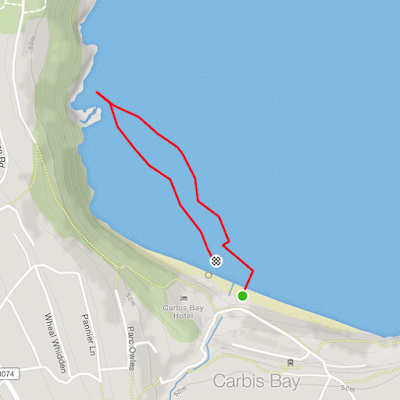 Overall it was a 1050m swim in 27 minutes which was plenty for me. Tom pointed out a rainbow over the sea which I'd missed due to my focus on forward movement. He was capable of swimming a lot faster than me and just kept a polite distance and checked that I was OK which was enough support; he seemed pleased when I said I was cold enough to warrant stopping.

The next day I ran past Carbis Bay and looked down at where we'd swum and it looked a very little journey.

I hoped to swim along the beach another day but the weather tended to decline and was too poor when I was available and the tide suitable.