On the last run the Grey/Orange Lone Peak shoes were ripped. For quite a while I'd notes the midsole collapse, the lack of lugs on the sole and the general shoddy nature of the uppers. The rip was the deciding factor though. So, after 1400km, new ones were ordered, as usual there was a new model, and tested today. 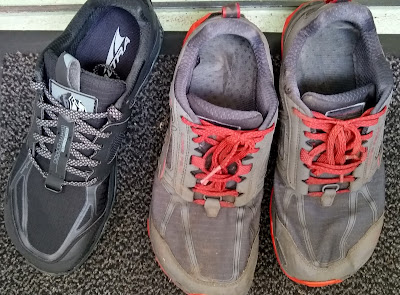 As might be expected they felt a bit stiff and the heel tab slightly caught my foot but for 45minutes they were fine. I did run slightly faster than usual but I'll put that down to the chill weather rather than new shoes.