Although the Garmin Forerunner 110 is a great training aid it's not reliable to log ultra runs as its battery life is only 5 to 6 hours in GPS mode. Ok, one doesn't do longer runs very often (indeed ones body can't cope with it) but it would be a shame not to log them. Additionally,  some events don't permit GPS aids, but you might still want to log the route. The answer is a display-free logger, such as the Holux M1000C, and similar devices. 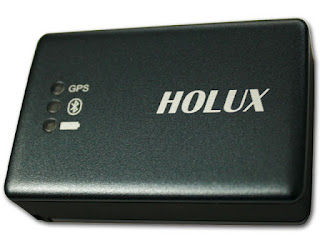 The 'user interface' is very simple, an ON-OFF slide and 3 LEDs, amber, blue and a red/green one. This makes its use pretty foolproof and no one can accuse you of getting assistance from it! In the UK these retail for around £40 from online shops but they do seem cheaper (and dearer) elsewhere. One of the great things is that it has a removable mobile phone type battery so very long use times can be achieved without a socket.

It is supplied without software although some for Windows can be downloaded. However, despite what the manufacturers say, the loggeer will work well on OSX, Linux and Android as the chipset is commonplace and developers have made software to download the data and convert it to GPX files. I've been using Androidmtk so I can read the data via my Nexus 7 and upload from there.

It's worth mentioning that presently the programme muddles the <ele> and <speed> tags in the file as the Holux M1000C swaps the data in it binary file compared to other MTK-based devices. However this isn't a problem as most online GPS mapping services use an altitude map to define height rather than the (usually rather poor) GPS-derived altitude.

Also, the BT747 software on OSX seems good too as it will control the features of the Holux rather than just downloading. I had a bit of trouble getting the USB 'serial' port to be recognised and I ended up using the Silicon Labs USB to UART driver with a recent (ie non default version) of BT747 as there's some issue with the version of a module incorporated into the program:

On my computer (Snow Leopard on 64bit Intel) the correct 'USB' serial port to use is /dev/cu.usbmodem24310 but it could be different for you. My old iMac doesn't have Bluetooth, but that might be an easier route to go. I can't get any version of the software to work on a 6 year old 32bit Core Duo Snow Leopard MacBook with either USB or Bluetooth.
Posted by Adrian at 13:37