My legs were typically leaden for the first few kilometres but they gradually fell into rhythm within the woods and worked well on the ascent of Blackamoor. Just as I started the climb through the trees I heard 2 cyclists splash through the form on the bridleway and all the way to Hathersage Road I kept expecting them to overtake me. They didn't so I suspect they must have turned off somewhere, I can't have been that speedy.

The evening was cooling by the time I reached Houndkirk Road but it was a calm and mild nonetheless. 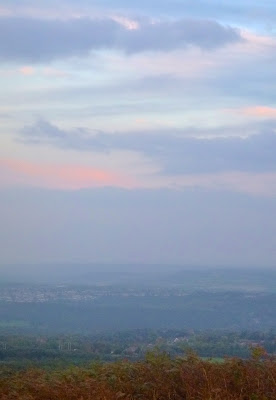 Last week I was concerned about stiffness in my right foot/ankle and this is still an ongoing problem  but I tried not to 'grip' the ground so much and it didn't seem so bad. Some areas of hard skin have become irritating on my toes and I put this down to the 'gripping' and perhaps a show that's starting to rub. The strange thing is that my feet and knees were great in Tenerife, in these shoes, even with substantial distances being covered. I think a starting point is to find a new chiropodist to have things smoothed off competently.
Posted by Adrian at 19:28

Email ThisBlogThis!Share to TwitterShare to FacebookShare to Pinterest
Labels: Blackamoor