After weeks of training my wife and I set off on the 50mile hike / ultramarathon to support a project of the University's. My aim was to run/walk and complete within 14 hours whilst my wife's goal was to complete it under the cut-off of 24 hours.

This would therefore be my longest ultra marathon having completed a two 30 mile events in 2015. In 2016 I consolidated training and tried to get over a few niggly runner's injuries although I suspect that aches and pains don't go away readily. We'd done a reasonable amount of walking training but I feel underprepared with regard to my running endurance. A bit of work with Excel showed that I needed to average 3.9mph around breaks to meet my goal, which is 9.5 minutes/km pace. 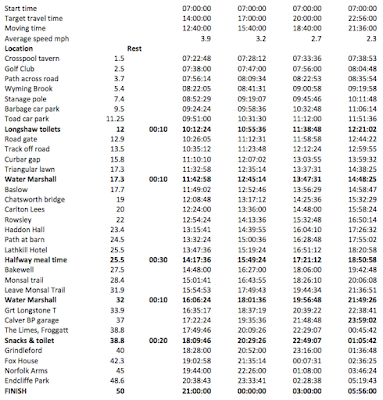 The start occurred just a few minutes after 7am, with the runners, then the fast walkers and then the rest. I slipped into the fast walker group as I didn't want to get swept into a rush of trying to keep up with runners in a class above me.

As the crowd moved through Broomhill and onto the A57 I made an effort to fall into a good walking pace and gradually passed the nearly all of walkers, revealing a group of runners ahead. I'd soon learn that the 'fast' runners were well ahead even then! I walked to Claremont hospital with a young man who hoped to complete in 16 hours, which seemed very feasible but as the road levelled off I had to commit to starting my short runs.

Above Rivelin valley I seem to have the path to myself although every so often I'd see a flash of white T-shirt or reflective garment. Two runners, who must have been late starters  caught up with me and passed quickly. They had a good solid pace. In this area I also met up with a couple I'd run with intermittently for the next 30 miles. 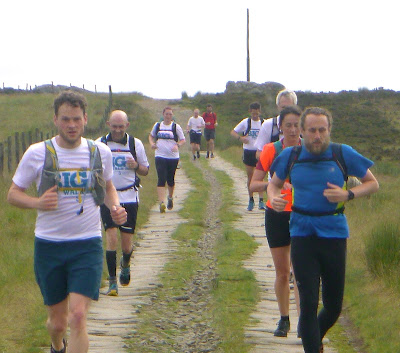 On the road to Redmires reservoir I caught up with a group of runners who train together in the University at lunchtimes. I passed them on the ascent to the Stanage Pole fully expecting them to pass me on the Edge as I progressed very careful along there having fallen an twisted my ankle previously trying to negotiate the stony outcrops at a pace. 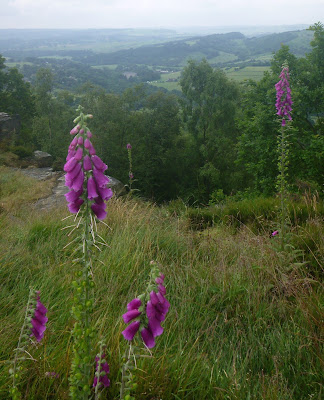 I was tempted to stop at the mobile cafe at Curbar Gap but continued to make steady progress, walking any stretches with even a modest ascent and slowly running level parts and shallow descents. Some colleagues from the Medical Faculty had passed me on Froggatt Edge although I caught up between Baslow and Chatsworth.

We'd been warned that there could be a lot of mud before and after Rowsley as the weather had been wet. There was certainly a little mud but the river valley was not as wet as I feared although the wet grass added to the dampness of my feet. 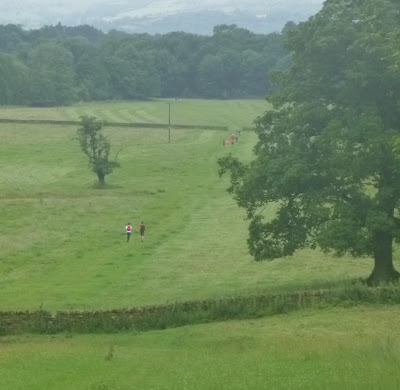 The halfway point at Over Haddon was very welcome; I was very pleased to arrive within 6 hours. My right foot had become sore, not blistered, more that it was bruised over the ball, perhaps due to my developing mid foot strike and the ongoing stiffness of the ankle. Neither of my usual niggles were causing problem although I'd felt both with the first few miles! After the rich pasta and coffee I felt ready to complete the run and negotiated Bakewell without difficulty. On Monsal Trail I caught up with one of the faster group of walkers who'd found himself rapidly fatigued. He'd a mini support team with him and wished me well moving into Great Longstone. 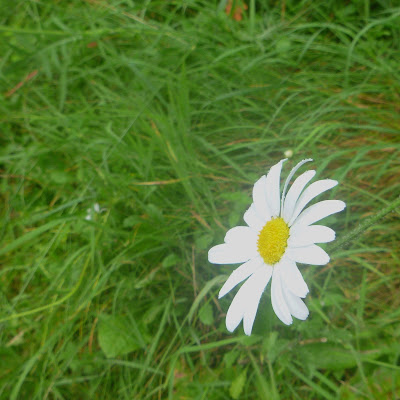 The road up to High Rake was a long as I expected but in the lower section the verges added a little brightness to a very damp and overcast day. The mist is visible in the haze in the photograph! The dry socks I'd changed into at Over Haddon were saturated by the time I'd descended into Coombs Dale and I could feel the insoles of my shoes squelching with every step.

I was looking forward to the rest stop at The Limes and was thrilled by the hospitality. The candles and flares weren't lit as yet but they were going to be a lovely sight for walkers arriving in the night. The forecast rain reached me in Calver but fortunately settled back to a bit of drizzle whilst I sheltered at The Limes. 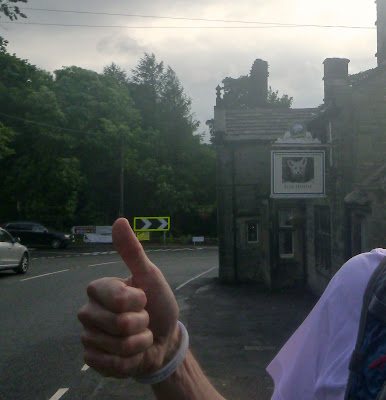 I knew I'd be walking the road from Grindleford to Fox House and managed a good pace. However, including the beginning of Houndkirk Road, which is also uphill, I'd been walking for an hour. This seemed to cause my legs to resist any effort to walk and even as the end became closer I found it increasingly hard to summon the energy to run.

Seeing the Royal Hallamshire Hospital in the distance was very welcome as I knew that the route through the Porter Valley was easy and leading directly to the end. Even though the path is good underfoot and generally downhill I was locked into a walk. A few mental calculations suggested that a 12 hour finish time was possible for me even if I walked the remaining 6km. I suspect that calculation was a factor in my legs shutting down. My lack of progress was nothing like that of Dorando Pietri as I was able to sustain a brisk walk up Borocco Bank, thinking how much better it was to be finishing a 50mile walk than be stuck in traffic.

Once the end was literally within sight I settled in for a few hundred metres of a steady jog arriving at the very quiet finish line 12 hours after starting. 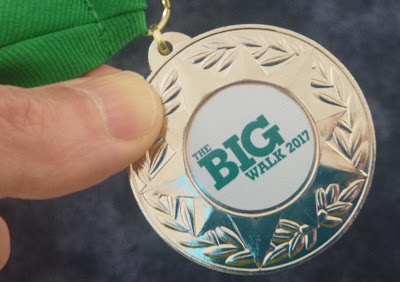 I wasn't expecting a medal but in a way that made it all the more rewarding to achieve. I heard that the couple I'd been with until Froggatt had arrived at least half an hour, perhaps even an hour ahead of me, so they'd really put the effort in for the last 15 miles or so.

My pace was remarkably consistent throughout the walk except for the final 6km that I was aware of. My wife completed in 21 hours which she was very pleased with. I think being active for that length of time is probably harder than working at a greater rate for less time. Those of us near the front of the group didn't need to queue for anything either! I think I've learnt, or reinforced a few things:


Thank you to Will Legon, David Meadows, Debbie Beaumont-Thomas and the rest of the organising and volunteer team; you put on a great event.
Posted by Adrian at 20:00