It's nearly a year since I last went to London for my swimming stroke coaching and I could tell that my technique had fallen below its usual poor standard. I'd become slower and started to develop shoulder pain.

During the year Morgan Williams has opened as a SwimSmooth coach in Doncaster, which is around a 40 minute drive from home and he works some weekends, which is a bonus to me. After a discussion about my goals which are:


he filmed me without the pull buoy. He felt that most of my problem came from poor arm position and action, especially in the 'reach'. The video revealed that currently I have a typical issue described on the SwimSmooth website.

My hand and elbow position were exactly as described. 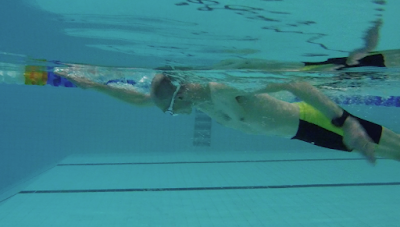 Not only does this slow me down, due to my limited flexibility it tends to force my hips down and increase drag. 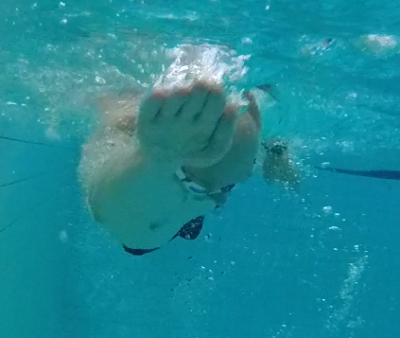 This was demonstrated quite clearly to me as against a wall I'm unable to have my arms straight above my head against wall, so in the water by forcing my arms forwards my hips drop to  compensate.

So for the rest of the session I had to focus on spearing into the water almost a foot below the surface when fully reaching and then to keep my shoulders 'shrugged' to facilitate elbows forwards. The 'doggy paddle drill' was helpful once I got the rhythm of it. Gradually it became clear that if I could control this movement my arm turnover increased without forcing it and across my shoulders felt more comfortable. Significantly my pace improved to around 2:12min/100m without the pullbuoy. As an aside, my legs worked less hard as my body position improved, giving me more energy to put into my arm stroke.

Part of the the style I'm aiming for is to bring my hand closer to my body, under my shoulder rather than to the side. This did feel to be a way to exert more power.

My plan for the next few weeks is to focus on these points on a length  by length basis, ensuring that technique is good and I don't resort to my (imprinted) habits.
Posted by Adrian at 15:05

Email ThisBlogThis!Share to TwitterShare to FacebookShare to Pinterest
Labels: swimsmooth