Don't swim with an altimeter

What I usually see is a drop to a temperature a few degrees above that officially posted.

So I downloaded an app to show the instantaneous temperature from the watch and that showed a fiery 295°C. 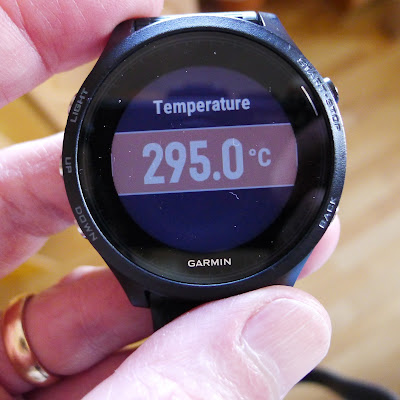 Looking back through my data, including runs it then become obvious that the altitude readings had become grossly out of range too, and showing no change on a known hilly route.

So, a bit of Googling revealed how to get into the service menu and a glance at the barometer check screen confirmed that internal data of the watch was wrong, rather than it being anything to do the Garmin Connect or IQ apps. The temperature and barometer module are linked as ambient temperature is required to adjust the absolute pressure into local altitude. It's worth noting that the watch has another temperature sensor, perhaps on CPU or GPS, which is working fine; but this isn't the one used for user data. 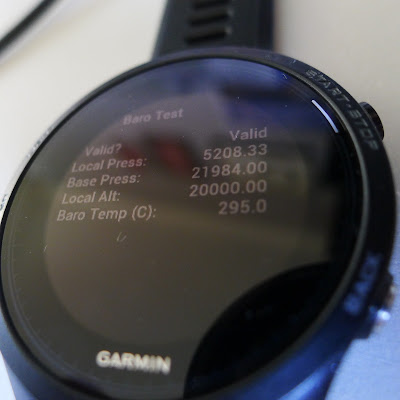 More online searching, ending up on the Garmin Forum, showed that this isn't my unique problem and actually affects other models, including the Fenix. This suggests to me that Garmin use a common subsystem for temperature/altimeter function which is prone to failure. There are at least two devices available including NXP's MPL3115A2 or Servoflo's MS5540 for this subsystem, the MS5540 being waterproof. In this strip-down feature the Fenix's barometer looks rather similar to a MS5540.

Thinking it through, although a barometer device may be rated for 100m salt water use, repeated immersion in chlorinated pool water, occasional salt water and then periods of drying out and perhaps the occasional drop is a very tough environment for a precision micro-mechanical component. Perhaps the whole concept of a multi-sport daily-wear watch is flawed?
Posted by Adrian at 10:36