Today I walked/ran the length of the Chesterfield Canal from West Stockwith to Chesterfield. The night before I stopped at a hotel in Gainsborough and this morning took a taxi to the start so as not to add 7 miles to an already long journey. I was fortunate in having a dry summer's day which was not too hot. 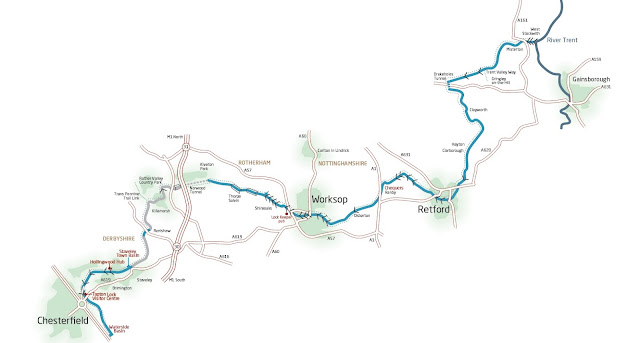 This plan meant that I was 'self-supporting', either carrying what I wanted or nipping off to local shops for water and snacks. My rucsac was around 4.5kg in weight, including a change of clothes for last night and in case I had to overnight in Worksop. My overall pace was 09:18 min/km which I believe counts as a run as it's faster than a typical walking speed. Between 10 and 15 km I felt at my best and hit a heady 7 mins/km, around 50km I was strolling.

The video/slideshow has an image taken each kilometre (roughly) of the route which gives a good impression of the scenery.

After previous experiences I made quite an effort to have sips of water/electrolyte but I was still dehydrated at times. I was able to buy or refill water bottles along the route and I estimate drinking over 3 litres. This time my problem was a lack of food. I'd failed to buy decent items for my early breakfast so set off on an empty stomach. That was fine for a few hours but after half way I found the items I was carrying/bought unappetising. I bought an onion bhaji & mango chutney sandwich from the Co-op and that really helped me along.

At the 50km mark I was disappointed with my lack of pace but notwithstanding the food issue, I was also saving a bit of energy for the last 20km. On my first 50km I had nothing left when I finished and clearly that wouldn't have been useful today. It was also quite demanding to be on my own. Although  I could set my own pace there was no-one else to try to keep up with, chat to, stay ahead of, or any of the other strategies that can encourage a bit of pace from a tired body.

Ultimately it was very satisfying, especially that the journey home on the train was trouble-free.

Take a look at Carl's video for a more in-depth report of the path.