Today's walk was in the guide book but was simply part of TF53. The footpath network in Tenerife is well developed with clear signage at the ends of routes and some painted indicators along the way. Of course, sometimes it is unclear if you've strayed onto a different numbered path so it is wise to have ascent map and 'feel' for the hills. 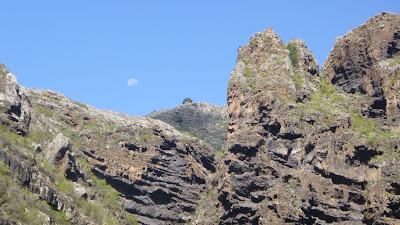 The path from Los Silos gained 950m to Erjos through  a striking volcanic barranco. Underfoot the path was well-made, initially cobbled and later from soil and leaves. I could imagine that it might be slippery in the wet but that wasn't an issue for us. If the sun hadn't been so hot there were other options to make a slightly longer circular route but we chose to trace our steps. Actually that wasn't a bad idea as we experienced quite different vistas in the two directions.

Midway during the ascent we passed an elderly man carrying a canvas sack of unknown objects on his back. We didn't know if he lived at Cuevas Negras or at a near-derelict finca beside the track. It was certainly a tough way to go about his business.

Los Silos was preparing for a fiesta and was picturesque. We were made very welcome at Mimo's cafe both before and after our walk.
Posted by Adrian at 19:00