After a day strolling from Altea to Albir on a pleasant day I needed to exert myself a bit more. I scanned OpenCycleMap and found some tracks inland of the A7 towards the Riu Algar. I did my best to memorise the route beyond the urban streets and set off at a gentle run.

The first route was obvious but after taking a few forks that path had gone from a a well-made dirt road to true 'single track'. 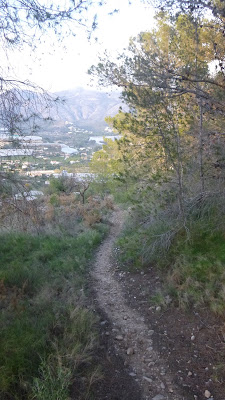 I was working from memory and could also tell that the paths on the ground were more plentiful than those mapped. Basically I didn't know which way was my chosen route. After reaching a gated dead end I turned back and completed the route clockwise instead of my hoped for anti-clockwise. There wasn't really anything wrong with this choice, just that I'd hoped to go the other way.

On my return I reviewed the route (just under 9km) and spotted my error and route options that I could have taken. That's fine as now I can plan runs for our next trip to Altea.
Posted by Adrian at 19:30

Email ThisBlogThis!Share to TwitterShare to FacebookShare to Pinterest
Labels: Altea