Today's weather forecast was superb and the reality didn't disappoint. I headed up Porter Clough and Long Causeway to the edge. 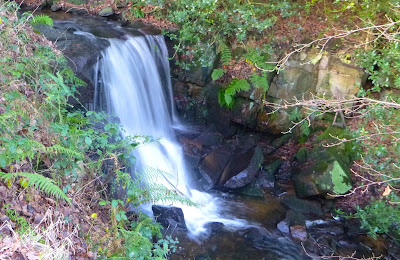 Although there was plenty of water running off the fells I chose this route as most is solid underfoot and it affords excellent views.

My pace was generally gentle with a goal to keep my HR below 140bpm as I've set previously for long runs. This naturally set me to walking some of the inclines and on my way to the edge I was interested in taking photographs.

Unfortunately early on whilst negotiating the uneven stones on the edge, not aided by having the sun in my eyes, I twisted my left ankle. Initially it was pretty painful and I was reduced to a stroll. After a few minutes I managed to pick up the pace into a fair walk but didn't want to risk upsetting it further. Naturally I was at the farthest point  from home and taxis etc when this occurred!

Once I reached the road I tried a gentle jog and found that it wasn't painful so long as I kept a short, fast gait. So that set my plan to return directly home on the road, which is the shortest route anyway. I had planned to go a little further via various tracks but that didn't seem wise and nor did I feel in the mood to do more than I was committed to.

Judging from 'Dr Google' I have only a Grade 1 sprain since I can walk readily with only minimal stiffness. There's no clear swelling although there is localised tenderness.

As soon as I done my essential shoe cleaning and protein drink duties I applied an ice pack whilst drinking coffee. During the afternoon I've had ibuprofen gel on it and I'm icing it again as I write. I'd had high hopes for getting some mileage done during these holiday days but now it looks as though gentle walks will be my limit for the next few weeks. I'll have no excuse not to go swimming!
Posted by Adrian at 18:05