This morning I looked at the western part of the route for the Peak District into ultra knowing that it included  few hills. I took the car to Bamford Station and set off soon after 8am. After a little road running at a gentle pace I reached the foot of Win Hill where the real work would begin. 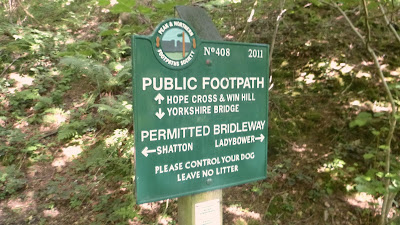 This approach to Win Hill is probably the steepest ascent in the area and I knew that I was going to walk. Even with a brisk walk my heart rate was above 140bpm but at least it's not a long track. In around 20 minutes I was at the top with lovely weather.

It's a fantastic view point revealing Ladybower, Kinder Scout, the Hope Valley and Hope cement works. The descent to Hope is fairly steep in places and that made it relatively slow. I'm very concerned about my knees and quads!

Th route then passed from Pin Dale behind the cement works to Bradwell where another shard but short ascent via Bradwell Edge brought me to the Byway onto Shatton Moor. 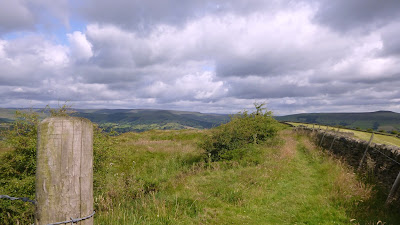 Then it was a simple descent along quiet roads and tracks back to the car park. The whole run was under 17km and undertaken quite gently to avoid injury and too much stress. I didn't mind that it took over 2hours as it was time on my legs. The trip did highlight to me though that I've not really been doing enough runs the last few weeks as I've ben in the pool.
Posted by Adrian at 14:48