This evening's run took in a section I know moderately well from Burbage along Stanage and then a largely unknown route from Hathersage to Carl Wark. OF course I know the area around Higger Tor and Carl Wark but I've never approached it along the route of the Intro Ultra.

As expected the stones on Stanage were tricky and I'll have to be careful on those although I shouldn't be too tired at that stage. I descended to Hathersage but the route to Yorkshire Bridge will be tough on the quads.

From Hathersge I joined a riverside path and quickly showed me the ascent I'd need to make to get back onto the ridge. 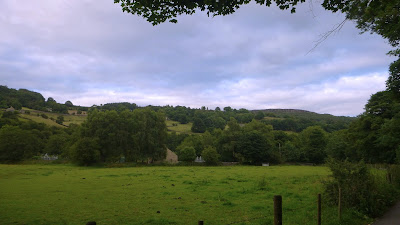 I walked a good portion of this. The first part unto the road via the railway was very steep and I can't see me running it even in an event. The latter part from the road to Carl Wark varied and should be runnable if I have some energy. It will be the last third of the event so that can't be taken for granted. 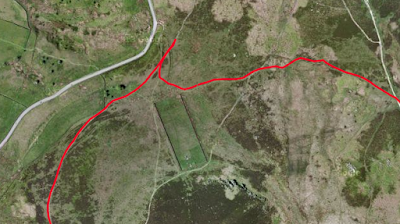 I often dither about the best approach to Carl Wark and having backtracked it's quite clear that the best route is almost along the northern wall of the walled enclosure. For the descent into Burbage valley keeping right was the best policy.

For a sub-17km run it was pretty hard going. I managed a real-world pace of around 7:30min/km including brief stops so that's OK. This 30 mile 'intro ultra' is going to be much harder than the Canalathon.
Posted by Adrian at 21:20