After the essential task of getting a load of washing on the line I ran my half-marathon length route up though Blacka Moor to Oxytones via Houndkirk Road. On the verge of Byway there were some new residents chomping away at the spare vegetation. 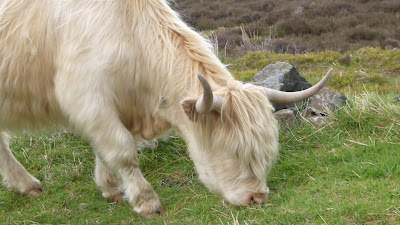 I suspect these are dun-coated Highland cattle but would welcome correction. I only saw four but there might be others free on the moor. They make a change from sheep but might be a bit scary if one crept up on you.

Anyway, the run was Ok. I didn't really notice my ankle until the 12km mark and on the descent through Limb valley I became aware of my left knee. Things weren't too bad when I got home and I easily managed to pop to the shops and cut the grass so no real problems. However this was my first run over 20km since the Canalathon so inevitably there is a bit of effort and retraining involved.

At the start of the run my heart rate data were all over the show - sometimes ridiculously high. Often this is due to the contacts being dry but that wasn't the case as I repeatedly moistened them. For the latter two thirds, or perhaps even four fifths the readings were fine. Maybe the level of sweat had built up enough to maintain the pick up. Might be worth swapping the battery to see if that helps.
Posted by Adrian at 16:08