Yesterday we arrived in Icod De Los Vinos on the northern side of Tenerife. After the travelling we walked down to the beach at San Marcos and then struggled back up the hill. That was enough exercise. However  today, after looking around the town I needed a bit of pointless effort.

I planned a route from Icod to El Amparo along a farm track but noted found that it was locked from the the road. I continued the march uphill and just outside El Amparo found a downhill road. Quite soon I met a man moving fruit and asked him if I could walk to Icod. He said that it was possible. Before I moved on he gave me some plums from his basket which was a generous gesture. 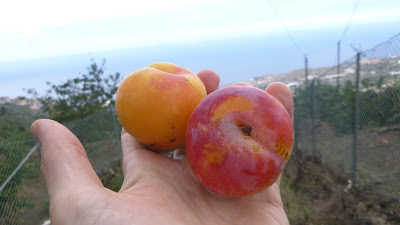 A little below the small holdings the path petered out into a stripe of dust but below that some very well made paths were visible above the terraces and so I pushed on. 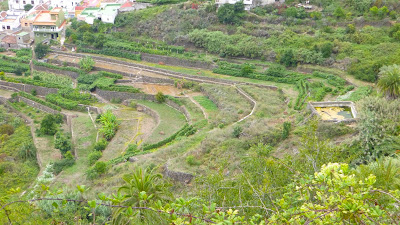 I started to become concerned that I was approaching the 'wrong side' of the locked gate I'd seen on the ascent as I mapped sought the route on the ground below and it headed directly to it! A few minutes later I knew that to be true and I was stopped in my tracks by a seriously high gate. I contemplated climbing it for only a second and approached a building to beg to belt out. Unfortunately there was no one answering the door, even though a pickup was parked outside.

The route bak uphill, past some snarling dogs and back down the road was not at all appealing and so I chose to take a track past some rather rough looking farm  buildings. I was thrilled to find the path continued towards another road in Icod. I though that at least I'd have a simpler chance at climbing out or asking for help. Even better, there was a steel gate, just afar, leading onto a cul-de-sac.

A bit of Googling once safely back at the hotel revealed that the closed land is part of a state-funded educational centre with a bit of record for under-performing. Perhaps the open gate is a nod to public access?
Posted by Adrian at 19:30