If you've followed this blog from the start in January 2013 you'll know that an advert piqued my interest in running a 100km event. I'd hoped to do that before my 50th birthday as I had what seemed like a reasonable length of time to train. I signed up to run the 2013 Intro 50km Ultra and achieved a 42km run in my training sessions. Unfortunately I didn't allow enough recovery from the training run and managed to consider myself unfit to do the event. With hindsight I think that I might have coped, but who knows.

I refocused my training, eventually realising that it was unwise to push the pace in long training runs, but even as summer of 2014 arrived I knew that I wasn't ready for the 50km run, never mind the 100km! The key problem for me seems to be that as I increase either training load or intensity something breaks! Over the winter of 2014 I cut back and rebuilt only to have a painful knee as spring approached. After many weeks of rest I ran my first Ultramarathon and was pretty satisfied with my 5:30 time for 50km.

Of course I needed recovery time and it felt as though I needed 'a day per kilometre' which is more than many runners seem to think. With this success under my belt I eventually paid for entry to the 30 mile Intro Ultra in the Peak District. Naturally I didn't start the event feeling strong as along the way I managed to develop problems in the right foot and ankle which I still don't feel I've got to the bottom of.

Nonetheless I was advised by the physio, Kim, to give the run a try and had rules for when I should probably pull out. I felt slightly positive as I started the Canalathon suspecting that my left knee would fail me but it didn't; hopefully the right ankle wouldn't bother me this time.

At 08:00 we set off, with a very small level of cheering, with me staying in the rear third of the pack as I suspected that would be my pace. There was a little bit of passing in each direction but it appeared that most of us had settled into a place in the event pretty quickly. Within a few kilometres the competitors were stringing out but it wouldn't be until around 30km or so that clear gaps between myself and other groups of runners would become apparent.

I made an effort to look after my pacing with a determination to walks hills and walk every 10 minutes or so if I'd not had to take a walk break already. During the first third of the run I was aware of my ankle and wondered whether I'd cope. Luckily it didn't become especially troublesome until after Carl Wark around the 40km point although the sole of my right foot had started grumbling a little earlier. Local knowledge was a great advantage as I followed the route entirely from memory although I couldn't find the best route onto Carl Wark.

Around the half way point I'd met up with Cheryl and we  had similar paces although I walked hills faster, she descended quicker. I dithered around the Pretzels at Bradwell but our paths crossed again during the ascent of Bradwell Edge. A little group collected together along the river to Hathersage when I was very pleased to accept extra electrolyte tablets to add to my water in an attempt to limit my cramp. The lesson here is to add to a stronger level than suggested on the packet and make sure you carry plenty. I'd put a few in the drop bags and been very (too) sparing with them!

On Houndkirk Road it looked as though my 7 hour goal would be hard to achieve as I thought I was losing pace. The stony road was irritating my already sore feet, especially the right, and I'd adopted a stronger heel strike gait to avoid pressure on my forefoot. Probably this was the sort of buid-up of pain that indicates enough is enough. The muscles and sole of my foot were becoming a final point for my attention and I was adapting my gait. I wasn't going to stop though with a mere 5k or so left! Half way down Limb Vally I knew I could achieve my goal even with walking the final very mild hill to Whirlow Farm. 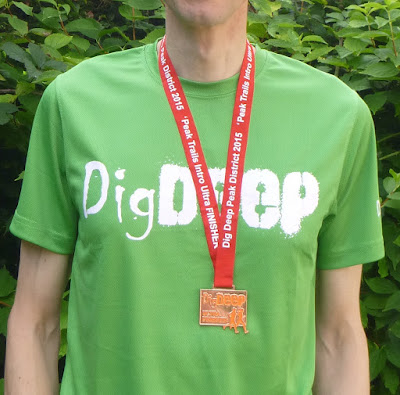 Our little group had split up during the final few kilometres as each tried to maximise their outcomes. Cherry wanted to beat her 2014 time, I was content with 7 hours, the other 2 with us just wanted to do as much as possible. We regrouped with cheers and handshakes at the finish line.

I really enjoyed the spicy vegetable stew and sampled the real ale although I suspect that it wouldn't be labelled 'suitable for vegans'. This morning my wife and I walked back to the farm to collect the drop bags and the abandoned car.


The Strava data show that I did a fair job of maintaining pace across the whole event, far better than I managed on the Canalathon. In general my legs don't feel as stiff and damaged as in March either, some of that might be due to better training, some to a slower pace forced on me by the slightly more technical terrain. The right ankle/peroneus muscle group is noticeable and I think a few weeks break will be wise.

So there is still unfinished business. In both my 50th and 51st years I have completed 'easy' ultramarathons but 100km feels to be unattainable. I suppose it is all a matter of perspective, on my 40th birthday I wouldn't have believed anyone who had suggested that I'd run (and walk) 50km in one session whereas now I know it needs a fair bit of effort, but is within my ability. Maybe the 100km can be in my 52nd year?
Posted by Adrian at 15:48