The last time that I ran along Stanage Edge I twisted my ankle which fortunately healed uneventfully. I'm still having trouble with my right ankle which is now an issue that's persisted over a year and I think that this makes me a bit unsteady, this raising the prospect of damage elsewhere. Anyway, with a bit of care today's run was uneventful.

The new Stanage pole  has been set into a cast iron base which is very impressive and worthy of Sheffield's industrial heritage. 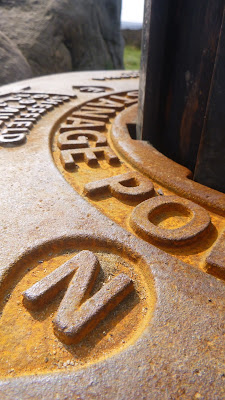 As this was a long slow run I was very cautious with my heart rate and the data show that I controlled that very well.

Towards the end of the run I tired quite noticeably and even a Chocolate Chip Clif Bar was unable to give me more energy. This is the longest run I've done in many months so it was bound to be hard work especially as Stanage and Burbage edges are both hard work due to the uneven terrain. My pacing was therefore nothing like as well controlled with marked decline through the run!

It must have been hot weather too. I tend to put between 500m and 750ml in the drinking bladder with an electrolyte tablet and even after a number of sips I return wit most of it. Today I don't recall being  especially thirsty but noticed near home that I'd run out of water, either that or the pipe was kinked.  As I tidied up my kit it was evident that I'd drunk the volume I'd taken. 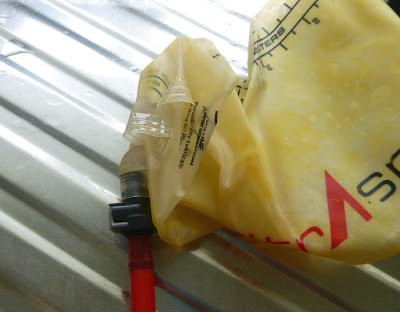 My right ankle was also rather tiresome as there is distinct soreness in the peroneus longus. I feel its the lower end of the muscle rather than the tendon so hopefully nothing too serious. It's a few weeks until my next physio appointment so I'll have to see if a combination of rollering, massage and ankle loosening exercises can do something to it.
Posted by Adrian at 14:57

Email ThisBlogThis!Share to TwitterShare to FacebookShare to Pinterest
Labels: Stanage